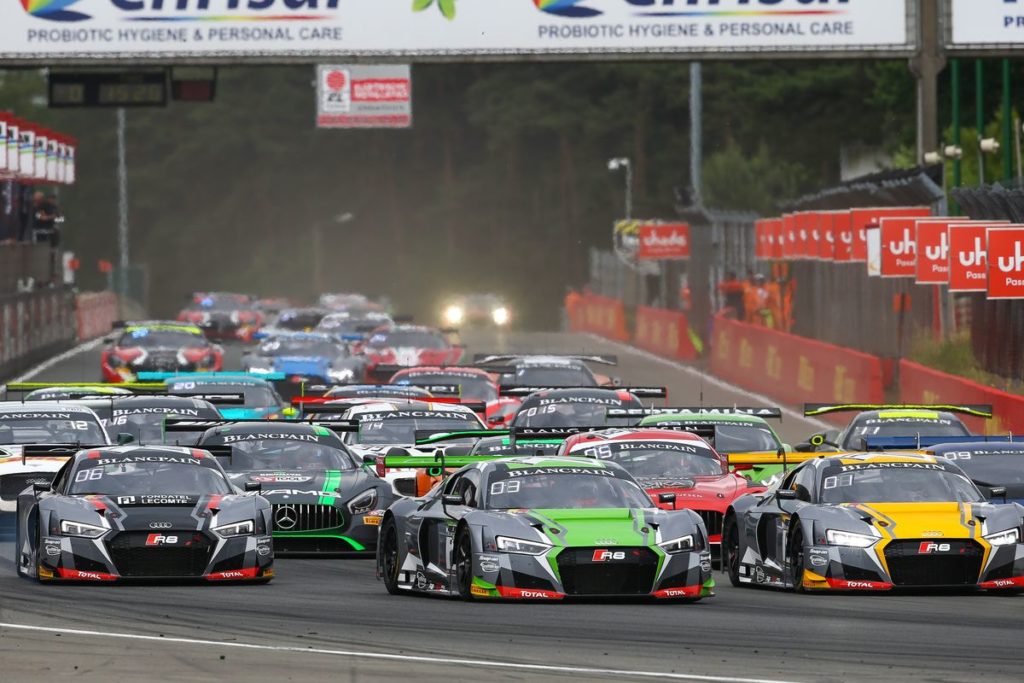 Will Stevens and Markus Winkelhock (#2 Belgian Audi Club Team WRT R8) claimed victory in the Blancpain GT Series main race at the Zolder track. A safety car intervention in the dying minutes meant there was only one lap of racing left when the lights went green again. Stevens held off all attacks, with Filip Salaquarda crossing the line in second, in the #75 ISR Audi he shares with Clemens Schmid. The #17 Team WRT Audi of Stuart Leonard and Robin Frijns finished third.

After yesterday’s hectic start, polesitter Stuart Leonard was determined to follow the starting procedure to the letter. Others didn’t, and Leonard was passed by Michael Meadows in the #90 AKKA ASP Mercedes-AMG before the lights went green. Meadows was given a drive-through penalty, effectively ruining any of his chances of a podium finish.

This transformed the duel between Clemens Schmid (#75 ISR Audi) and Markus Winkelhock (#2 Belgian Audi Club Team WRT R8) – both of whom had managed to overtake Leonard on the opening lap – to a fight for the lead. Winkelhock managed to get alongside the white Audi once, but Schmid kept his cool and held on to first.

Both Audis entered pit lane at the same time, but then the pit stop of the Belgian Audi Club Team WRT crew made the difference. Will Stevens (in the #2 Audi) was able to leave the pit lane with a lead of a couple of seconds over Filip Salaquarda, now at the wheel of the #75. The Czech driver’s position came under threat, when Robin Frijns (who had taken over from Stuart Leonard) set a series of fastest laps. However, Frijns could not manage to overtake Salaquarda.

When the race was neutralized after a contact between the #86 and #88 Mercedes-AMG cars, the gaps between the leaders was reduced to naught. It took a while to clear the track, and when the safety car came in, there was only one lap of racing left. Stevens handily used the presence of a backmarker behind him to drive away from Salaquarda and Frijns, and they in turn had to manage the presence of yet another Audi, the #5 Belgian Audi Club Team WRT R8 in the hands of local hero Dries Vanthoor. Although Frijns tried to find a gap twice, Salaquarda managed to hold to second. The first victory of the Winkelhock-Stevens duo was never under threat, and in the Blancpain GT Series Sprint Cup driver standings the German-British pairing are now only five points behind leaders Maxi Buhk and Franck Perera, who finished in sixth in Zolder. Qualifying Race-winners Frijns and Leonard also made a jump forward in the standings, and are now seven points down.

In Silver Cup polesitter David Fumanelli made a slight mistake in the second lap, and the #42 Strakka Motorsport McLaren dropped a couple of places. That promoted the #85 HTP Motorsport Mercedes-AMG to first in Silver Cup, but that was not enough for Jules Szymkowiak and Fabian Schiller. The youngest duo of the field had started the Qualifying Race from last, but some inspired driving in both races eventually led to a more than decent eighth place overall. The runner-up spot in the Silver Cup went to the #55 Spirit of Race Ferrari of Lorenzo Case and Phil Quaife, after contact in the final corner dropped the #67 Attempto Racing Lamborghini of Pohler and Van Splunteren and the #42 Strakka Motorsport McLaren down the order. The latter was also penalised with a one-minute stop & go, which was converted to an addition of 90 seconds to its race time.

In the Pro-Am Cup Michael Broniszewski quickly fought his way to the front, at the wheel of the #11 Kessel Racing Ferrari. He passed the leading Ferraris of Piti Bhirombhakdi and Alexander Mattschull in the opening laps and the reigning Blancpain GT Series Pro-Am champion – who had never raced in Zolder before – never looked back. Giacomo Piccini finished the job in the second half of the race. It was a great recovery from the Italian-Polish duo and the Kessel Racing team, after an unlucky spin in Saturday’s qualifying left them with a badly damaged car. With Bhirombhakdi and Carlo Van Dam claiming second in Pro-Am and the Ferrari 458 Italia of Stephen Earle and David Perel scoring full points in the Am Cup, the weekend ended on a high for the Swiss Kessel Racing squad.

Will Stevens (#2 Belgian Audi Club Team WRT R8, 1st): “I was a bit worried at the end, for it felt like there was an issue with the car. I wanted the safety car to stay out as long as possible. The team probably did their best pit stop of the year, after Markus drove a great stint. This is a great result, and I am sure that there will be more this year.”

Filip Salaquarda (#75 ISR Audi, 2nd): “I am so happy for the whole team, for we really deserve this result. The last lap was really hard, for I had to brake late into the first corner and Robin almost passed me. Clemens took a great start, which set us on the way to this podium finish.”

Stuart Leonard (#17 Team WRT Audi, 3rd): “I followed the procedure, as directed by the race director. I was on pole, and I could dictate the pace. In the end cars around me went when the lights were still red. A frustrating finish to what has been a really fantastic weekend.”

Fabian Schiller (#85 HTP Motorsport Mercedes-AMG, 1st Silver Cup): “I was quite confident we could make up some ground. The progress was quite good, finishing in eighth, but in the end we cannot be happy. Every weekend we have the potential to finish inside the top-5, but due to mistakes we fail to qualify well.”

Michael Broniszewski (#11 Kessel Racing Ferrari, 1st Pro-Am Cup): “We were a bit unlucky with a crash in qualifying, for the tyres were colder than expected. It was a difficult first race, but now we are stand on the top step. I hope this is the start of a series of good results.”

Stephen Earle (#888 Kessel Racing Ferrari, 1st Am Cup): “I really enjoyed myself. With a couple of quicker guys around me on the grid, I kept my nose clean at the start. The main trick is not to lose too much time when you are being overtaken. I will be back for the next Sprint race, that’s for sure.”

0 0 0 0 0
Previous : GP3 teams congregate for two day run in Hungary
Next : The Belgian Audi Club Team WRT reopens the game in the Sprint Cup with a double win and four podium finishes at home race in Zolder