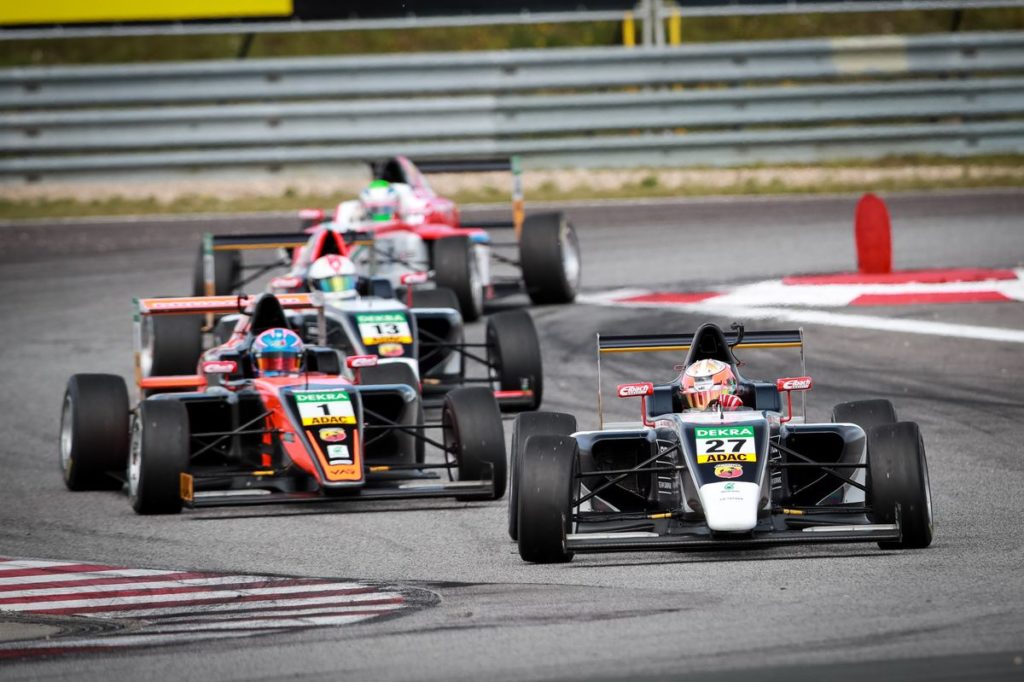 Last year’s winner of the Best Rookie trophy, Nicklas Nielsen, celebrated the first victory of his ADAC Formula 4 career in the second race of the season at Oschersleben. The 20-year-old, who is a member of the US Racing team managed by ex Formula 1 and DTM driver Ralf Schumacher and Gerhard Ungar, won from pole position ahead of Felipe Drugovich (16, Brazil, Van Amersfoort Racing) and Fabio Scherer (17, Switzerland, US Racing). The best rookie was Mick Wishofer (17, Austria, Lechner Racing) in P14.

After two races, Nielsen moves into the championship lead on 43 points, having finished second on Saturday morning: “I’m really happy. Thanks to my team. Now I’m looking forward to tomorrow’s race. You never know what might happen then, either!”

Shortly after the start, there was a collision between multiple drivers, as a result of which Michael Waldherr (20, Germany, Neuhauser Racing) was forced to retire. The race was temporarily suspended and subsequently restarted with a shorter duration. Nielsen was not going to let the interruption knock him off his stride, however, and he successfully defended P1 at the restart. Although Drugovich closed the gap over the remaining laps, he was unable to get past. Scherer and Vips were also queuing up behind.

The starting order for the third race (Sunday, 11:45 CEST, live on SPORT1+) is determined by the result of the first race, which was won by Vips. The Top Ten line up in reverse order, which means that Kami Laliberté starts from pole position and race winner Vips from tenth.

Nicklas Nielsen (Winner, US Racing): “It was similar to the first race. I was initially very fast and managed to pull out a lead. Towards the end, though, it got tight again. It was fun competing with Felipe; we were team-mates last season.”

Felipe Drugovich (Second, Van Amersfoort Racing): “Obviously, I would have liked the victory, but second place is also really good – just like every podium finish. I also set the fastest lap, so I’m pleased about that.”

Fabio Scherer (Third, US Racing): “I’m basically quite satisfied with the weekend so far. It’s miles better than last year – even if everything still isn’t perfect. There’s a gap between us and the top, but the season still has a long way to go.”

Mick Wishofer (14th and Best Rookie, Lechner Racing): “The pace was very good, and I was able to overtake some opponents. I am happy about my start to the season. The ADAC Formula 4 is a highly competitive championship, so it’s not really easy for a rookie. But if I continue to work hard, I will definitely improve. Anyway, that’s what I’m aiming for.”