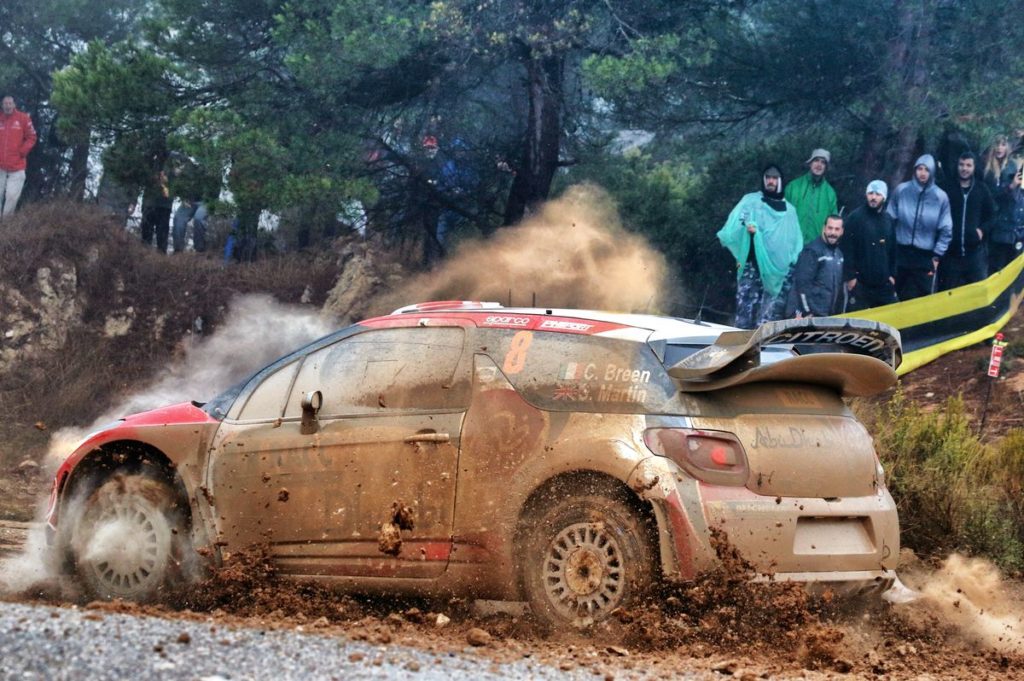 Held on gravel – or rather on mud – the first leg of Rally de España was something of an emotional roller-coaster ride for the Abu Dhabi Total WRT. Despite rolling their car on SS2, Kris Meeke and Paul Nagle set the fastest time on the final stage to end the day in seventh place in the overall standings! They are just ahead their team-mates Craig Breen and Scott Martin, who were slightly more cautious in the Catalan quagmire. Meanwhile, Khalid Al Qassimi and Chris Patterson ended the day in eighteenth position.

Before taking on the gravel roads around Tarragona, the competitors began the rally on Thursday evening with a super special stage held in the streets of Barcelona. Despite the rain, the fans gathered around Plaça Espanya in large numbers to see the cars race through the capital’s streets. Without taking any risks, Kris Meeke and Craig Breen set the fifth and sixth fastest times.

The rain continued to fall until the early hours of Friday morning, contrary to the forecast, leaving the day’s three stages – each contested twice – extremely wet. Tyre choice for the morning was therefore relatively straightforward, with all the crews opting to fit Michelin LTX Force soft tyres.

When the first splits on SS2 appeared on the timescreens, the amount by which Kris Meeke was trailing did not augur well. At the end of the stage, the Briton explained that he had rolled the car! Fortunately, the damage was minimal and the car was able to continue the rally as normal. Kris was down in tenth position at that point, whilst Craig Breen was eighth.

Given the particularly difficult conditions, the Irishman decided against attempting the impossible. The kilometres covered provided him with precious experience and he held onto his position until the mid-leg regroup. Kris Meeke was up to ninth place by then, 3.7s behind his team-mate.

As the rain finally eased off, the competitors could tackle the second runs in a more relaxed frame of mind. Once again, they opted for soft compound tyres. The afternoon loop gave Kris Meeke the chance to showcase his skills: fourth and fifth on the first two stages, he then claimed a stage win on Terra Alta 2, the longest speed test of the day at 39km.

Kris moved past his team-mate all the more easily after Craig suffered a spin on SS5. The crew had to repair a radiator leak on the road section, but their mechanical skills enabled them to finish the day without losing any more time.

Lying twenty-first after the morning loop, Khalid Al Qassimi gained three places in the afternoon. The Abu Dhabi driver was pleased to have made it to the end of such a difficult leg.

The cars headed back to Salou in the early evening for the longest service of the year. The mechanics have 1 hr 15 mins to convert the cars to tarmac configuration. Tomorrow will bring a new challenge for the crews, as the rally switches to the fast, wide and sweeping roads typical of the Catalonia region!

Kris Meeke: “Obviously, it was a bit of a frustrating start to the day for us. We knew it was going to rain, but it was torrential in the mountains! And when the dust that normally covers these roads gets wet, the surface becomes incredibly slippery… A few kilometres after the start of SS2, I was caught out by some standing water in the ruts. It put the car sideways on the road and we touched the bank and rolled. The damage was superficial and we only lost fifteen or twenty seconds with the roll! But with the conditions, I don’t think I would have been able to fight for the lead in any case. I quickly refocused on my main objective for the weekend: find a good rhythm and feel comfortable on this surface. The results in the afternoon were encouraging, even though my road position helped. Overall, it’s still a disappointing day, but we’re not out of it yet. Let’s see what we can do, maybe we can sneak a podium.”

Craig Breen: “This has been one of the most difficult days of my career. We had to deal with the worst conditions, with so much rain and mud. The first stage was particularly tough, the rainfall was at its heaviest just as we set off and there was a lot of standing water on the ground. We did our best, but I still made a minor mistake on SS5 and spun the car. Although we weren’t going very fast, we hit a tree and that damaged the radiator. We were even more cautious after that, so we made it to the end of the day without incident. I’m glad we switch to tarmac and a more traditional rally tomorrow!”

Khalid Al Qassimi: “I’ve never seen conditions like these in Catalonia. It wasn’t enjoyable to drive in such thick mud and I was even more cautious when I saw other cars stopped by the side of the road. I really backed off and didn’t take any risks at all this morning, even if the reduced power meant the car wasn’t really working properly. On the second runs, there was more grip and I was able to push a little bit more. I felt more confident as the afternoon drew on and I quite enjoyed the Terra Alta stage. Tomorrow we reset everything, it’s a completely different rally when we switch to tarmac. I hope that the weather will be kinder, both for us and for the fans!”