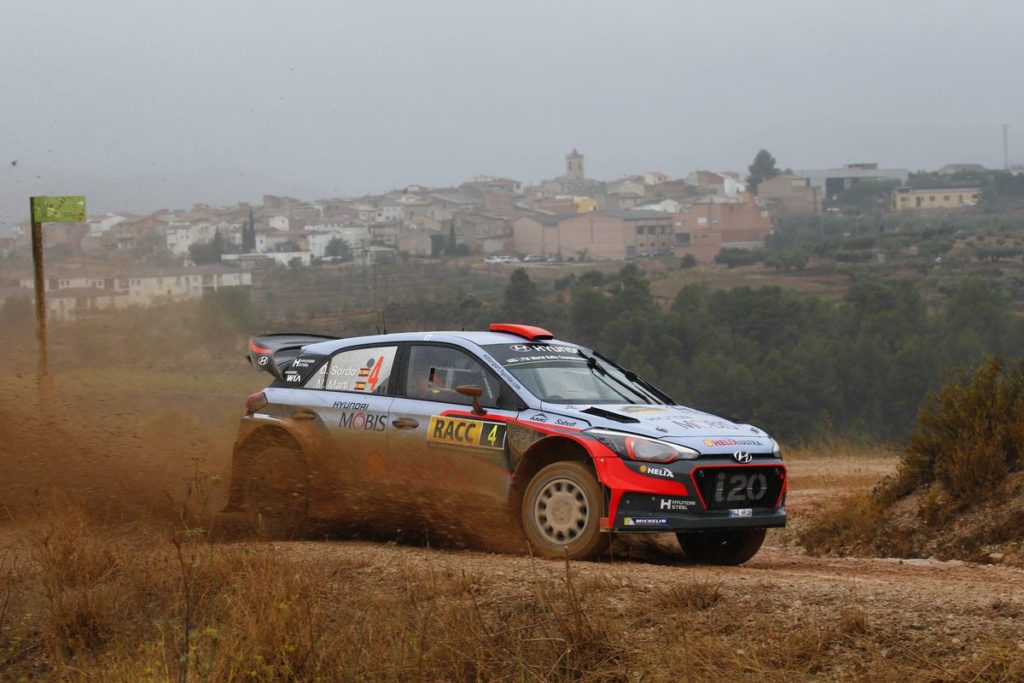 Hyundai Motorsport has made a stellar start to Rallye de España with its Spanish crew Dani Sordo and Marc Martí leading the way on the first day of their home event.

Sordo took two stage wins on the afternoon loop, with an impressive performance in the #4 New Generation i20 WRC that saw him initially take the lead and then extend his advantage over Sébastien Ogier to 17 seconds.

Thierry Neuville and Hayden Paddon both had struggles during the day but are firmly in the fight for the podium in fourth and fifth respectively. In his fourth WRC outing for the team this season, it was a solid day for Kevin Abbring as he finished just outside the top-ten in 11th overall.

Run over a total stage distance of 115.90km, with no lunchtime service, it was a tough start to the rally with the wet weather augmenting issues. Drivers only had a remote tyre fitting zone in Ascó to split the morning and afternoon loops with slippery conditions catching several crews out during the day.

Sordo (#4 New Generation i20 WRC) ended the first loop of four stages in fourth place overall, negotiating the complicated conditions with caution. With the support of a passionate crowd of local supporters, the home heroes had a competitive afternoon with consecutive stage wins in SS5 and SS6, and second place in SS7 helping to increase his lead.

Sordo said: “It has been an unbelievable day. I am really pleased to be leading the rally, particularly in front of all these amazing Spanish fans. The New Generation i20 WRC has been fantastic to drive today, and it is thanks to the whole team that we have been able to start the rally in such a positive manner. The wet conditions have made these stages very slippery, so it has been an achievement to make it through without any problems. We haven’t really been taking any risks so far, but as we move onto asphalt for the remaining days, we need to make sure that we keep up the fight.”

Neuville (#3 New Generation i20 WRC) and co-driver Nicolas Gilsoul started Friday brightly with a stage win in SS2. The Belgian pair led the rally early on and finished the morning loop in a strong second place. A spin in SS5 at the start of the afternoon resulted in damage to the front of the car after it hit a tree, but the crew worked hard to finish the day in a fighting fourth.

Neuville said: “It’s been a day of two halves. The opening stages this morning went well, despite the conditions, and we were able to take a stage win and briefly lead the rally. We were keeping the pressure on and headed into the afternoon in positive mood. Unfortunately, we got unlucky in the repeat of Caseres as we approached a slow right-hand corner, I got stuck on the inside and the car spun, hitting a tree. The engine stalled and we lost some time restarting. We were able to fix some of the damage and could continue the loop. Thankfully we minimised the time loss and will look to push more tomorrow.”

Paddon said: “We have been battling a technical issue all day which has prevented us from doing too much more. In fact, I’m surprised we’ve been able to set some of the times we have. This morning already felt like we were missing some power and we had no throttle response. I adapted my driving style, which felt a bit unnatural, but with no lunchtime service there wasn’t much else we could do. I think we could have been quite competitive, so it’s a bit of a missed opportunity. Still, we have made it through and we’re still in the hunt for a good result. Tomorrow’s another day, as they say.”

Abbring (#10 Hyundai i20 WRC) and co-driver Seb Marshall made solid improvements throughout the day, as they sought to gain experience on the mixed surfaces of Rally de España. They contributed to a team 1-2 in SS5 with a sublime second time, but suffered an engine-related problem in the final stage of the day, which dropped them outside of the top-ten.

Abbring said: “It’s a disappointing end to the day with the problem but all in all it’s been a positive experience out there. The conditions have not been easy, so it’s heightened the challenge for us. We’ve never rallied on stages like these before, and certainly not on wet gravel, so it’s been a learning curve. I felt we were doing ok, particularly in the afternoon loop. Second in SS5 was a real boost to the confidence. But in the final stage we experienced a loss of power, which in turn lost us a lot of time. It’s a shame but we will come back stronger tomorrow – and I hope we will be able to enjoy a drier day.”

It’s been a positive start to Rally de España for Hyundai Motorsport with three stage wins including two 1-2s. The results marked the tenth time this season the team has finished 1-2 in stage, while Sordo’s result in SS5 was the 40th stage win of 2016 for a Hyundai Motorsport driver. With three New Generation i20 WRC cars in the top-five, the team has its sights on a strong result on Sunday.

Team Principal Michel Nandan commented: “What a day! We are not accustomed to competing in Spain in such wet and slippery conditions as we have faced so far this weekend. It’s not been an easy start for any of the drivers out there. With that in mind, I have to commend all our crews on making it through the day so encouragingly. Dani, especially has had a brilliant start to his home rally. He has really built momentum, which we will need to harness for the rest of the weekend. We had a technical issue on Hayden’s car, which has prevented him from making a stronger attack, while Thierry and Kevin have also both experienced difficulties. Overall, though, we can’t really complain with three cars inside the top-five and Dani heading the field. Our crews will now face one of their toughest tasks of the season with just 75 minutes of service to change set-up on all four cars as we prepare for the asphalt part of this special mixed surface event. There’s a long way still to go!”

Saturday’s itinerary consists of eight asphalt stages with revised layouts making sections of the schedule new for all drivers. Four stages (Vilaplana, Alcover-Capafonts, Querol and El Montmell) get the day underway leading up to lunchtime service. A repeat of the Alcover-Capafonts, Querol and El Montmell tests will follow in the afternoon. The rally concludes with a 2.24 Salou stage making a total of 139.18km of competitive stages on the penultimate day.

Overall Classification after Day One