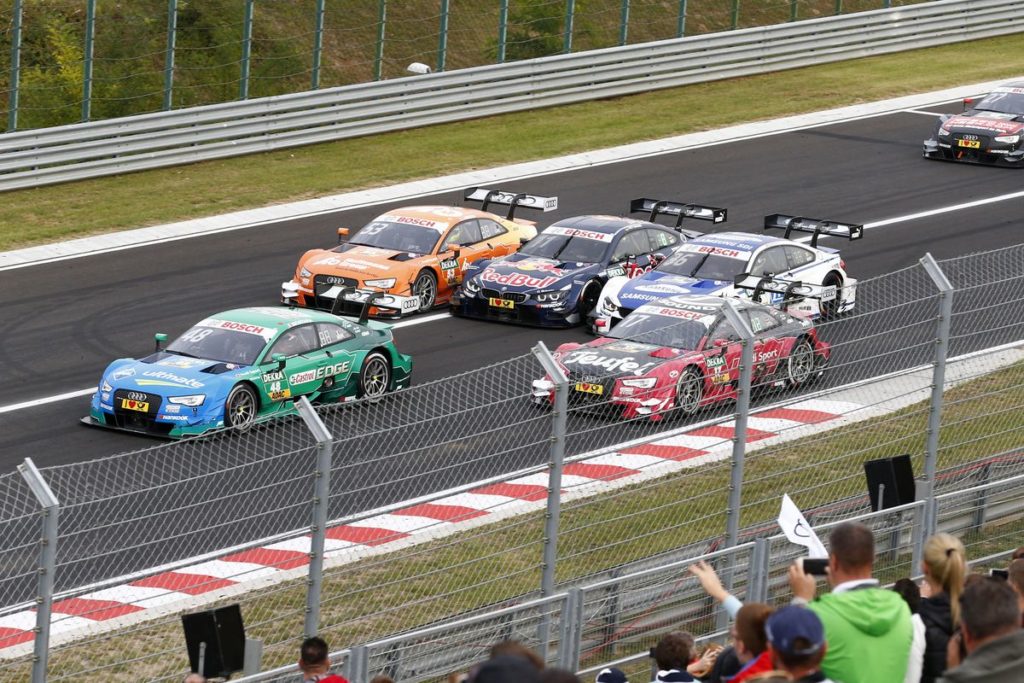 At the end of every DTM season there are three titles to be won. And the fight for each title has been taken down to the season finale held from 14th to 16th October at the Hockenheimring Baden-Württemberg. Prior to the last two races of the 2016 season, Marco Wittmann holds the lead in the drivers’ championship while Audi are the leaders in the manufacturers’ and team standings – the latter courtesy of Audi Sport Team Abt Sportsline. Consequently, one may expect to witness a dramatic clash between Audi and BMW as the gaps between them are extremely close in all the three rankings. Meanwhile, the chances of Mercedes-AMG who won the 2015 drivers’ title courtesy of Pascal Wehrlein are extremely slim, this year. But although the Stuttgarters arguably will have to travel home without a title under their belts they definitely will give their very best to finish the season on a high.

There still are three drivers would could win the title in the season finale at Hockenheim: Marco Wittmann, Edoardo Mortara and Jamie Green. The gap between championship leader Wittmann and his main rival Mortara amounts to just 14 points. With 50 points still to be won, this promises to become a close battle. A battle Green (39 points behind Wittmann) only can get involved in if the two favourites encounter major problems.

In the recent DTM past, the Hockenheimring seemed to suit the Audi RS5 DTM better; six of the last eight races were won by drivers racing for the Ingolstadt based manufacturer. Last year, for instance, Mortara won the season opener at Hockenheim and Green even celebrated two race wins at the venue of the German Formula One GP. Therefore, Mortara travels to Hockenheim in a confident mood: “I’m looking forward to the grand finale and travel to Hockenheim with boosted self-esteem. I hope that I will be able to pass Marco on the home straight of the season. We won’t give up but keep on fighting to the very end.” Meanwhile, BMW’s last Hockenheim win to date was secured some 30 months ago – but the man who celebrated this win was the current championship leader who is aware that defending his lead will be anything but easy. “We have to keep cool in the season finale and to avoid getting involved in any scuffle. And doing so won’t be easy as the races at Hockenheim usually feature a lot of action,” says the German.

In the battle for the team title, the roles are reversed. Prior to the season finale, Wittmann and his team are main rivals of the leaders. Wittmann and Timo Glock are racing for BMW Team RMG that travels to Hockenheim with a 25-point gap to Team Audi Sport Abt Sportsline represented by Mortara and Mattias Ekström. As the Swede won’t contest the season finale due to the Word Rallycross round held on the same weekend, Audi opted for a driver swap for tactical reasons, for this weekend. Mike Rockenfeller, usually a Team Phoenix driver, will join Mortara at Team Abt Sportsline to fight for the win in the team ranking. While René Rast who replaces Ekström will race for Team Phoenix.

Audi also holds the best position in the battle for the manufacturers’ title. In this ranking, the brand with the four rings holds a 37-point lead over BMW, prior to the final race meeting of the season. “In the fight for the team and manufacturers’ titles we are lying in the wait,” says BMW Motorsport Director Jens Marquardt who of course would love – just like his Audi counterpart Dieter Gass, Audi’s head of DTM – to win all the three titles. “I am convinced that the season finale once again will make for a lot of drama.” An assessment that is shared by Gass: “It goes without saying that we know that everything can happen in a DTM season finale. So, making zero mistakes is a must for all those involved.”

Meanwhile, Mercedes-AMG will have to content themselves with tipping the scales in the fight for the titles although they theoretically still could win the manufacturers’ title. But with a 174-point gap to the leaders, the Stuttgarters would have to secure at least all the top-six positions in both races to do so. Therefore, the eight Mercedes-AMG drivers will travel to Hockenheim without any pressure and try to leave the season on a high. Daniel Juncadella for instance, who secured his best DTM result to date by finishing third at Budapest but was disqualified after the race says: “I hope that I will be able once again make it to podium, at Hockenheim, and possibly even to a higher step.”

The backdrop in 2016 once again will be appropriate for a DTM season finale. During the races on Saturday (from 14:55 CEST / 13:55 BST) and Sunday (15:15 CEST), the grandstands will be packed with spectators. The paddock tickets for the DTM season finale already have been sold out and so, the admission to the music event on Saturday evening, featuring the likes of ‘The BossHoss’ on the stage in the paddock, has been limited to the holders of these tickets.

Grandstand tickets for the DTM season finale can be purchased in advance at DTM.com/tickets or on site at the box offices.