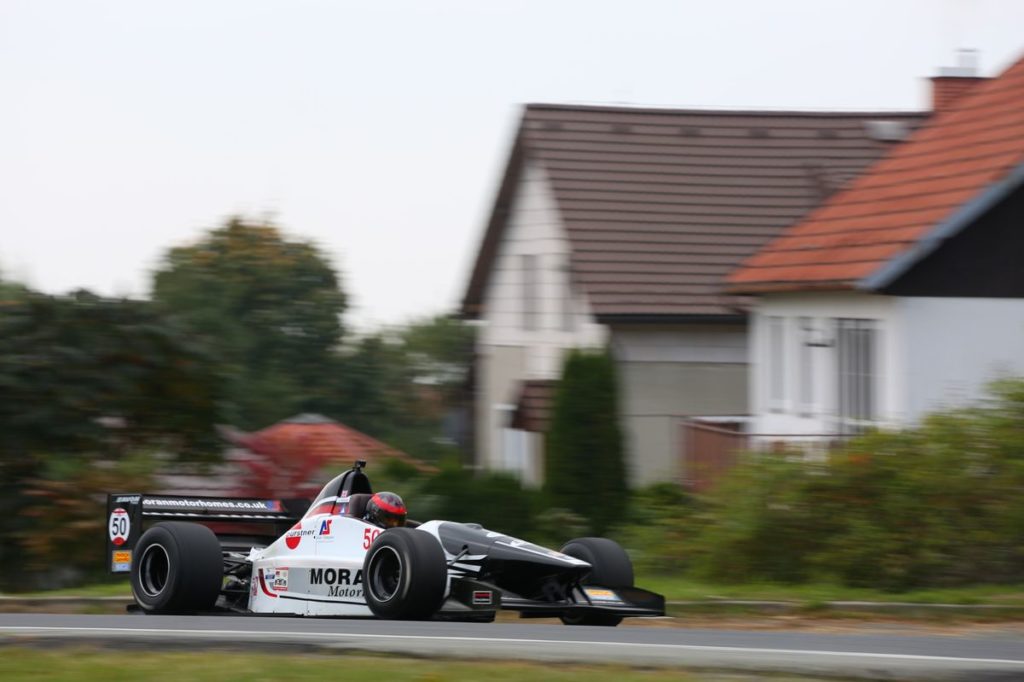 Before the driver presentation, which was both convivial and well-attended, in the heart of the Czech town of Šternberk, on Saturday the competitors in the second edition of the FIA Hill Climb Masters took part in two practice runs. Lucio Peruggini (Ferrari), Simone Faggioli (Norma) and Scott Moran (Gould) were the fastest climbers in each of the three Categories.
The serious side of the FIA Hill Climb Masters began on Saturday with two practice climbs by the 111 competitors at the start of the second edition. Although the two drives have no impact on the classification, they do however give some idea of the way things will end on Sunday in Šternberk, in the Czech Republic.
It was no surprise that the two leading lights of the FIA European Championship were the fastest in Category 2 at the end of the day, with the best time recorded by the Italian Simone Faggioli (Norma M20FC-Zytek) less than a second ahead of his compatriot Christian Merli (Osella FA30 Evo-Fortech). A third Italian driver completed the top 3 in practice, Paride Macario thus confirming his status as the best “rookie” in European competition this year.
It is also in Category 2 that we find the fastest female driver, Martine Hubert. Four times Ladies Champion of France and winner of this class in the first running of the FIA Hill Climb Masters at Eschdorf two years ago, the lady from Normandy sported a very broad smile after practice. “How great it is to be here!” she said. “We travelled almost 1,800 kilometres to get here, but we have no regrets! The event is magnificent and the public love it. Many of them are already here and they applauded me after my second drive, and that pleased me a great deal. Don’t tell anybody, but I even had tears in my eyes … For me, having started the regional events with extremely limited means, to take part in such a high-class competition is a dream coming true. Of course, I hope to win the ladies’ class again. But, above all, I want to make the most of the opportunity to be here and to enjoy it as much as I am able.”
Without the same knowledge of the climb as the Italians, who know the Šternberk track from the European Championship, the British contingent nonetheless confirmed that they should be considered favourites for the gold medal in Category 3 (for cars meeting national requirements but not an FIA technical definition). The six-times UK champion Scott Moran (Gould GR61X-NME) was a little ahead of Trevor Willis (OMS 28-RPE), Wallace Menzies (Gould GR55B-NME), thus making himself a candidate for medals by sliding into third place. As a matter of honour, and because a racing driver is above all a competitor at heart, they wanted to come close to the best times posted by drivers from the continent …
In Category 1 for Production Cars, it was the GT cars which led the way with the best time posted by Lucio Peruggini in his Ferrari 458 Italia GT3. The Italian having won seven races out of seven in his national competition, he was no less impressive on his first sortie outside his own country. “I love hill climbing and to take part in an event which brings together drivers from so many countries makes me very proud,” he explained. “Until now, I must say that I am impressed by the quality of the organisation and the atmosphere which prevails here. My Ferrari 458 Italia GT3 comes straight from circuit racing. Elsewhere it is always maintained and prepared by the famous AF Corse team. Naturally it had to be considerably modified to meet hill climb regulations, in which the constraints are very different to those for circuit racing, particularly because tracks are much bumpier. But I find that we have managed very well to adapt the car to my style of driving.”
The clock proves this: the Italian was well ahead of the other GT cars of France’s Philippe Schmitter (Lamborghini Gallardo FL2 GT3) and Nicolas Werver (Porsche 997 Cup S), confirming him as favourite for the gold medal in his Category. But practice is one thing and the race is something else! On Sunday, three heats are scheduled and only the best time will be taken into consideration in determining the final classification.
Don’t forget that the three heats of the FIA Hill Climb Masters will be live-streamed in their entirety on Sunday via the following link: https://goo.gl/LxiRZA.
Finally, against the background of such a friendly competition, the presentation of all the drivers, from 16 different countries, was held on Saturday at the end of the afternoon on the main square in the town of Šternberk, in front of a large and enthusiastic audience. A concert was planned for the evening to make this rendezvous in the Czech Republic and grand festival in honour of Hill Climb racing!
Practice results
Class 1:
1. Lucio Peruggini (ITA – Ferrari 458 Italia GT3) – 1:33.55
2. Philippe Schmitter (FRA – Lamborghini Gallardo FL2 GT3) – 1:35.30
3. Nicolas Werver (FRA – Porsche 997 Cup S) – 1:36.16
Class 2:
1. Simone Faggioli (ITA – Norma M20FC-Zytek) – 1:19.36
2. Christian Merli (ITA – Osella FA30 Evo-Fortech) – 1:20.25
3. Paride Macario (ITA – Osella FA30-Zytek) – 1:20.75
Class 3:
1. Scott Moran (GBR – Gould GR61X-NME) – 1:22.49
2. Trevor Willis (GBR – OMS 28-RPE) – 1:22.76
3. Wallace Menzies (GBR – Gould GR55B-NME) – 1:23.83
The full results and live timing are available at: http://timing.eccehomo.cz/masters/absolute?Pretek=290
Press release FIA Hillclimb Masters
Tags:2016Christian SteinerFabien BoudubanFIA Hillclimb MastersFrédéric NeffMarcel SteinerMassimo BeltramiReto MeiselRoger SchnellmannRomeo NüssliSternberk

0 0 0 0 0
Previous : Rebellion Racing will move to LMP2 in 2017
Next : FIA Hill Climb Masters – Gold medals for Faggioli, Moran and Peruggini, the swiss team on the podium of Cup of Nations