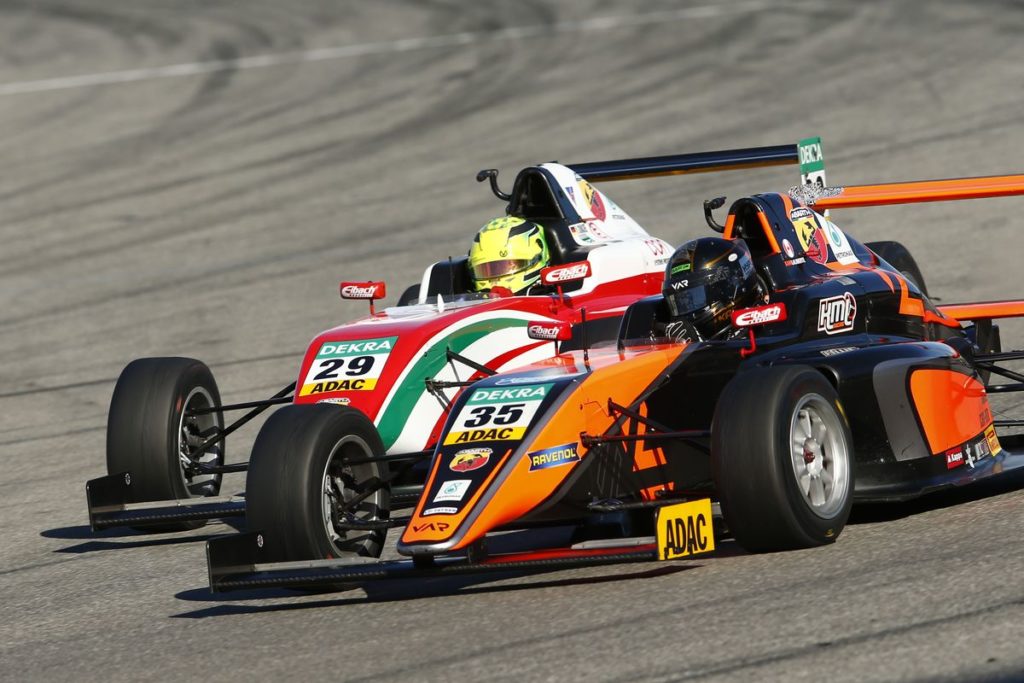 Mick Schumacher (17, Germany, Prema Powerteam) had a consolation prize to round off his season: the ADAC Formula 4 championship runner-up won the last race of the ADAC High Speed Academy at the Hockenheimring, propelling his Prema Powerteam to victory in the team rankings. The son of record Formula 1 championship winner Michael Schumacher won ahead of Kami Laliberté (17, Canada, Van Amersfoort Racing) and Prema team-mate Juri Vips (16, Estonia), who was also Best Rookie on the day. Freshly crowned champion Joey Mawson (20, Australia, Van Amersfoort Racing) retired after a collision and came away without points for only the fifth time this year.

Prema overtook Dutch team Van Amersfoort in the team standings. The Italians ended the season on 459½ points compared to Van Amersfoort’s 455. “The championship was very important to the team,” said Mick Schumacher. “It’s the reward for all the long, hard work.” The title in the Best Rookie classification meanwhile went to Nicklas Nielsen (19, Denmark, Neuhauser Racing), who took the chequered flag in eighth place.

The drivers produced one last thrilling race for the spectators to end the season, a race that Mick Schumacher won with a decisive overtaking manoeuvre just before the finish. Up until that point, Canadian driver Laliberté had been in front, but championship runner-up Schumacher drew past him with just a few corners to go and was highly delighted to take his fifth win of the season at the finish line.

Laliberté had made a good start, quickly working his way up into P1. Behind him, Schramm and Schumacher fought for second place. The new champion, Mawson, lined up in tenth position and quickly gained several places. However, he was forced to retire following a collision with rookie Lirim Zendeli (16, Germany, ADAC Berlin-Brandenburg e.V.). The safety car came out on track for about seven minutes as a result.

Laliberté maintained his lead after the restart, but the safety car came back out after another contact between Robin Brezina (17, Germany, Rennsport Rössler) and Oliver Söderström (18, Sweden, ADAC Berlin-Brandenburg e.V.). This time, Schumacher was quicker off the mark on the restart and put Laliberté under pressure. He closed on the Canadian over the final lap to finally pass him with a superb overtaking move, making sure of the win at the finish line.

Comments on the ADAC Formula 4 race

Mick Schumacher (Winner, Prema Powerteam): “The runner-up also gets a trophy, and I’m very pleased about that. We can now celebrate this evening with the team.”

Kami Laliberté (second, Van Amersfoort Racing): “I’m really disappointed. I wanted to win at all costs, and then we would have won the team title. The safety car knocked me out of my rhythm, but Mick also drove well and fought hard.”

Juri Vips (third and best rookie, Prema Powerteam): “This has got to be one of the best weekends of my life. It’s great that we managed to lift the team title. It didn’t really look like we were going to before the race. Too bad that the rookie title didn’t come my way. Still, we’ve won the team championship today and can enjoy the end-of-season party this evening.”