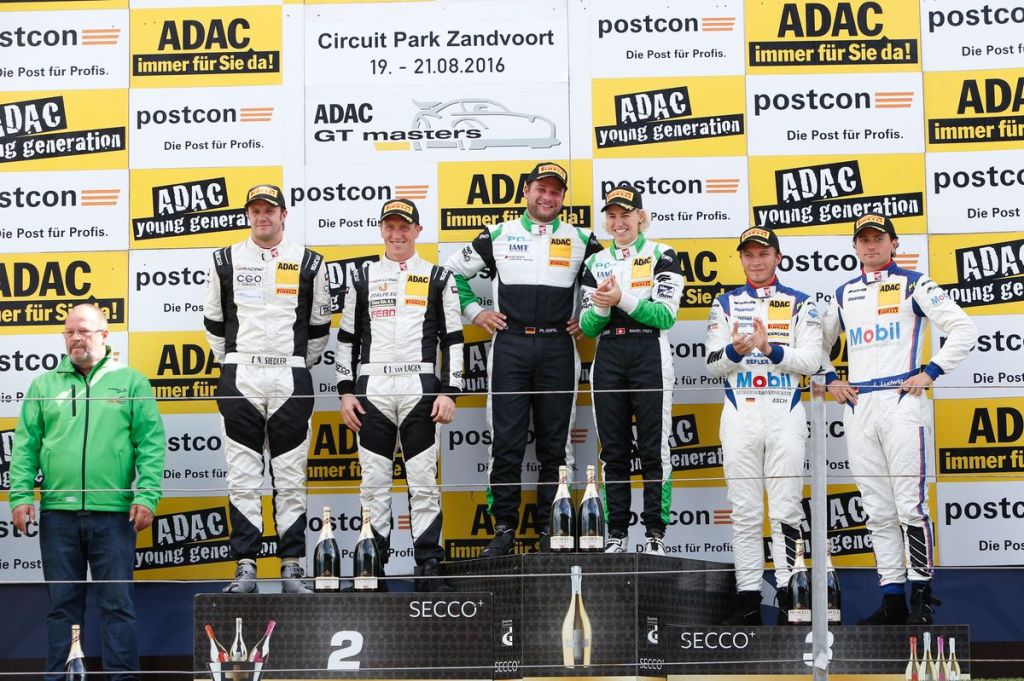 Philip Geipel (29, DEU) and Rahel Frey (30, CH, both YACO Racing) are the winners of the second of two ADAC GT Masters races on the Dutch North Sea coast. After starting from 17th on the grid, they brought their Audi R8 LMS across the finish line on the 32nd and final lap 1.51 seconds ahead of the Lamborghini Huracán driven by Norbert Siedler (33, A) and Jaap van Lagen (39, NL, both HB Racing WDS Bau). The key to victory was a brilliant display of teamwork plus a quick tyre change when there was a sudden downpour early on in the race. After a speedy change of drivers and an equally rapid change back to dry tyres, Geipel put in a strong second stint to defend a narrow lead. “What an incredible day!” said Geipel after recording his second ADAC GT Masters victory. “After qualifying this morning and only managing P17 on the grid, the mood in the team was totally down. And that came after we’d set some decent times in the free practice sessions. When the rain came, we knew immediately that we should change tyres. With it being so wet on the first section of the track wet, it was clear that it would take a long time to dry out again. We knew there should be enough time to wait before changing back to slicks during the mandatory pit stop. That was a fantastic team effort.”

A heavy shower of rain early on during the seventh lap proved decisive in the outcome of the twelfth race of the season. Only a few of the teams decided to change to wet-weather tyres, while the top four drivers – pole-setter Kévin Estre in the Porsche, Jaap van Lagen in the Lamborghini and the two Audis of Christopher Haase and Christopher Mies – persisted on slicks. The track did indeed dry out again by the time the mandatory pit stop came round in the middle of the race, but the advantage gained on the faster laps in the rain paid off thanks to skilful handling of the change back to slicks during the driver handover, especially for Geipel and Frey. Siedler and van Lagen eventually placed second. Sebastian Asch (30, DEU) and Luca Ludwig (27, DEU, both AMG Team Zakspeed) came home behind them in P3 to join the podium party. They had also made the switch to wets for a time and had consequently been able to progress from sixth on the grid. However, the chances of a successful title defence for the Mercedes-AMG pair are now looking slim, since they have a points deficit of 42 to make up, and there are only 50 points up for grabs in the finale at Hockenheim in late September.

But the prospects have improved for Connor De Phillippi (23, USA) and Christopher Mies (27, DEU, both Montaplast by Land-Motorsport). After coming second in Saturday’s race, they finished fourth on Sunday in their Audi R8 LMS and leave Zandvoort as the new leaders in the standings by the small margin of just two points. The previous championship leaders, Jules Gounon (21, F) and Daniel Keilwitz (27, DEU, both Callaway Competition), finished fifth in their Corvette. De Phillippi further extended his lead in the Junior standings with another class win. Damage to the Porsche 911 GT3 R of David Jahn (25, DEU) and Kévin Estre (27, F, both KÜS TEAM75 Bernhard), winners of Saturday’s race, inflicted a setback in their title bid. Following an error of judgement while driving in the wet, Estre spun off track and had to retire from the race. However, with a 30-point deficit ahead of the finale at Hockenheim, Jahn still has a chance of lifting the title. 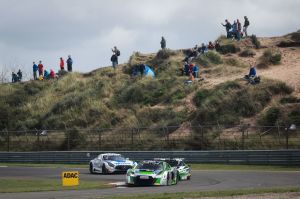 Robert Renauer (31, DEU) and Martin Ragginger (28, A, both Precote Herberth Motorsport) crossed the finish line in sixth place ahead of Frédéric Vervisch (30, B) and Christopher Haase (28, DEU, both Montaplast by Land-Motorsport). Eighth position went to Jesse Krohn (25, FIN) and Louis Delétraz (19, CH, both Schubert Motorsport) in the BMW M6. Jeroen den Boer (28, NL) and Claudia Hürtgen (44, DEU, both Schubert Motorsport) were ninth. In his first race after a long break, den Boer took the win in the Trophy rankings. The Top Ten was completed by Patrick Kujala (20, FIN) and Milos Pavlovic (33, SRB, both Bonaldi Motorsport) in a Lamborghini Huracán.

Comments from the winners

Rahel Frey (YACO Racing Audi R8 LMS): “Mega, just mega – an incredible team effort from start to finish. We’ve won the race from 17th on the grid! This was down to perfect coordination and perfect pit stops – plus the fact that we were both really fast on the track.”

Philip Geipel (YACO Racing Audi R8 LMS): “We were even joking before the race that a sudden downpour would suit us fine. And that’s exactly what happened… The pit crew did a perfect job today. Both wheel changes in under 30 seconds – that’s world class. What a race, what a victory! And as they say: ‘No risk, no fun'”