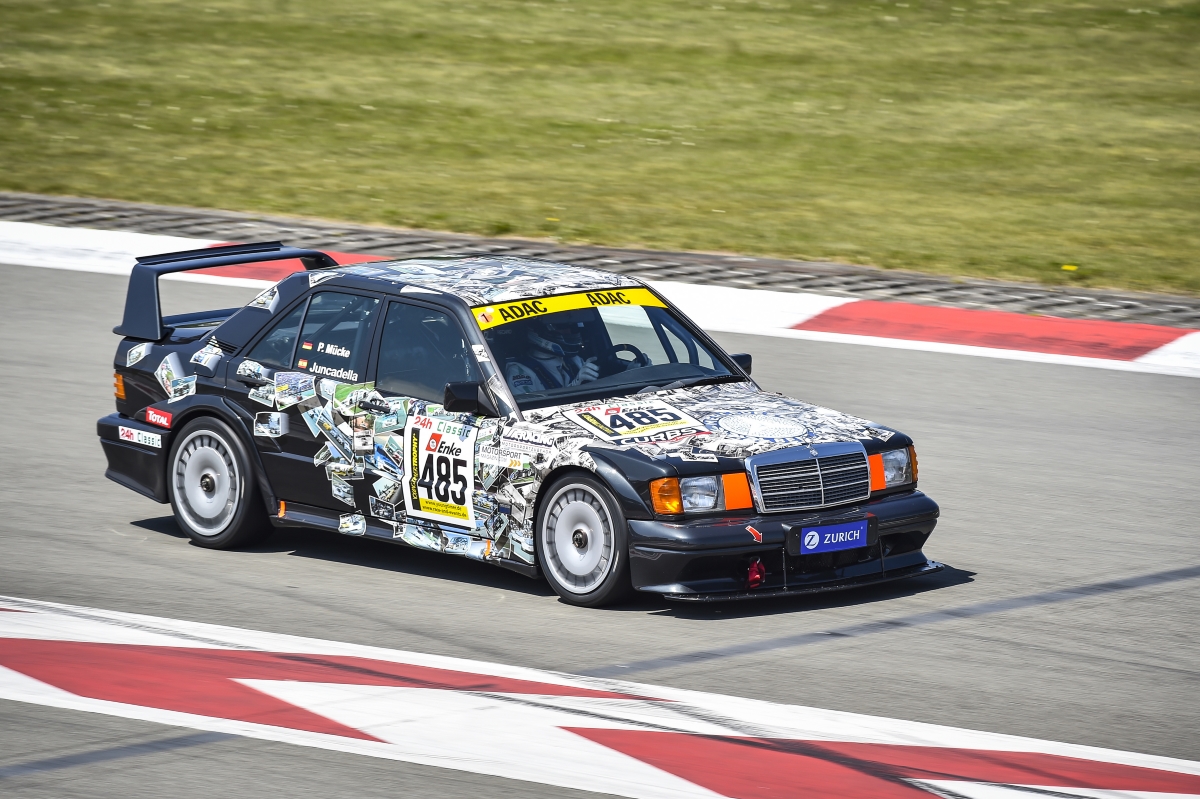 They’re racing again: On 27 May 2016, Mercedes-AMG DTM racing driver Daniel Juncadella will again start in the Youngtimer Trophy at the Nürburgring driving an EVO II constructed by Mercedes-Benz Classic. As in the past year, he will compete in the Three-Hour Race of the ADAC 24h Classic. Juncadella will share the cockpit with TV moderator Matthias Malmedie (“Grip – Das Motormagazin”, RTL II). The Mercedes-Benz 190 E 2.5 Evolution II is one of the most famous and successful racing sports cars in DTM history. Mercedes-Benz Classic constructed the car as an authentic copy of the Group A racing cars of the early 1990s and has been using it in the Youngtimer Trophy since 2013.
More than 160 vehicles will start as part of the ADAC 24h Classic event. The 190 E 2.5 Evolution II from Mercedes-Benz Classic is in direct competition with other EVO IIs in the Group A vehicles of the years 1989 to 1991. The starter field of the event comprises vehicles of the mid-1960s and newer. The race starts at 4:20 pm on Friday, 27 May, following the qualifying on Thursday, 26 May. The ADAC 24h Classic race is run on the legendary Nordschleife and on the Grand Prix track. It is the second race of the season of the Youngtimer Trophy and of the FHR racing series.
Youngtimer motor racing as a journey through time
The Youngtimer Trophy is an extraordinary journey through time to the recent past of circuit motor racing. The racing series is characterised by a high degree of authenticity. Mercedes-Benz Classic set standards in this regard with the construction of the second works racing car of the Stuttgart-based brand for historic motor racing: Like all competing vehicles, the 190 E 2.5-16 Evolution II works racing car complies with Appendix J of the International Sporting Code of the FIA (Féderation Internationale de l’Automobile) and the homologation requirements of the particular era.
The Mercedes-Benz EVO II works racing car as a high-performance vehicle based on the Mercedes-Benz W 201 compact class continues a brilliant and multifaceted history in its race starts of the present day. The inaugural race of the new Nürburgring in May 1984 featured 20 vehicles of the Mercedes-Benz 190 E 2.3-16 model with Ayrton Senna emerging as the eventual victor. In 1988, Mercedes-Benz entered the German Touring Car Championship (DTM) with a motor racing touring car developed on this basis.
The 190 E 2.5-16 Evolution had its début in 1989, followed finally 26 years ago in the 1990 season by the successful EVO II with an output of 274 kW (373 hp). It competed in the DTM for the first time at the Nürburgring in June 1990. In 1992, Klaus Ludwig won the DTM championship driving an EVO II, with his team-mates Kurt Thiim and Bernd Schneider finishing as the runner-ups. Ludwig also won the DTM race on the legendary track in the Eifel in 1992.
The driver of Mercedes-Benz Classic at the ADAC 24h Classic 2016
Daniel Juncadella
born 7 May 1991 in Barcelona, Spain
In 2004 Daniel Juncadella began his motor racing career in kart racing at the age of 13. In 2007, he switched to formula racing. After winning the legendary Macao GP in his Formula 3 car in 2011, he made 2012 his year: Juncadella won the title in the Formula 3 Euro Series and the FIA Formula 3 European Championship while also winning the Masters of Formula 3 race in Zandvoort. The highly promising racing talent switched to the DTM and Team Mücke Motorsport for the 2013 season. The successful collaboration was continued in 2014. In addition, Juncadella is a reserve driver for the Force India Formula 1 Team, which uses Mercedes-Benz engines. 2016 is the fourth DTM season for Daniel Juncadella. His personal choice of start number: number 12.
The vehicle from Mercedes-Benz Classic at the ADAC 24h Classic 2016
Mercedes-Benz 190 E 2.5-16 Evolution II (W 201)
In August 1989, work began in the in-house Mercedes-Benz sport technik (st) department on the second stage of development of a DTM racing car based on the compact class W 201. The Mercedes-Benz 190 E 2.5-16 Evolution II made its racing début on 16 June 1990. Mercedes-Benz Classic constructed the vehicle used in the Youngtimer Trophy since 2013 with utmost authenticity for historic motor sport races. The first works racing car, a Mercedes-Benz 220 SE (W111) affectionately referred to as the “Racing Fintail” by fans, celebrated its première in the Dunlop FHR Long-Distance Cup in the 2011 season.
Technical data Mercedes-Benz 190 E 2.5-16 Evolution II
Year of production: 1990
Cylinders: 4/in-line
Displacement: 2463 cc
Output: 173 kW (235 hp) at 7200 rpm
Top speed: about 250 km/h.