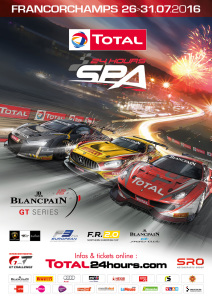 During the Monza event, the second round of the 2016 Blancpain GT Series, the official poster for the upcoming Total 24 Hours of Spa was revealed. At just under 100 days before the start of the longest race of the year, the highlight of the season confirms its status of biggest GT race in the world, and will again provide entertainment for the whole family.

Three of the newest GT3 cars – appropriately in the black, yellow and red colours of the Belgian flag – storming up the world-famous Raidillon with spectacular fireworks in the background: the poster of the 2016 Total 24 Hours of Spa is an excellent representation of the spectacle and entertainment the fans can expect during the last weekend of July.

Obviously, the action on the track plays a major role during the weekend. There are already 60 cars on the preliminary entry list, representing a minimum of 11 manufacturers. The Total 24 Hours of Spa is not only the blue riband event of the Blancpain GT Series, it is also the second round of the inaugural season of the Intercontinental GT Challenge, which creates an extra buzz among the teams and drivers.

As is the tradition, the support races bring plenty of cars as well. Single-seater aces will try to shine in the FIA Formula 3 Championship and the Formula Renault 2.0 Northern European Cup and the Lamborghini Blancpain SuperTrofeo brings no fewer than 50 ultrafast Lamborghini Huracan. Apart from the 24-hour race there is also GT3 action in the Blancpain GT Sports Club. The championship, aimed at Bronze drivers, visits Spa for the first time and all 25 drivers are already chomping at the bit to get into action on the mythical Ardennes track.

With at least 60 cars on track during the Total 24 Hours of Spa, there will be plenty to watch out for. That is why, for the first time in its existence, the biggest GT race in the world will get start-to-finish television coverage. Extra floodlights will be placed along certain parts of the track as well, to be able to show more of the racing during the night hours.

With all this activity on the track, it will not be easy to find enough time to enjoy all of the entertainment alongside. For in 2016 as well, the Total 24 Hours of Spa event will be much more than a motor race. On Saturday evening there will be the concert (the headliner of which will be announced shortly), and in the Village there are plenty of activities for the whole of the family. Fairground rides, dodgem cars, drink and food stands, merchandising shops: you can find everything in the Village. On the karting track there will be a 24-hour kart-race as well. And in case you were wondering: everything – yes, the Saturday concert as well – is included in the General Entrance ticket.

In fact, do not wait too long to get your tickets, for some ticket holders will again be able to attend the grid walk and share the final minutes before the start with the heroes of the Total 24 Hours of Spa. A limited number of tickets will be available soon and will be sold via ticketmaster.be. A unique opportunity to admire cars and drivers from up close, you must agree!

Stephane Ratel (Founder and CEO SRO Motorsports Group): “We tried to give the official poster for the Total 24 Hours of Spa a Belgian touch, and I think we pretty much succeeded in doing so. We are very happy to be able to offer the fans of the Blancpain GT Series and the Intercontinental GT Challenge a very full and entertaining programme for what is arguably the biggest GT race in the world. The entry lists are magnificent, both for the 24-hour race and for the support races, and the varied entertainment next to the track makes this an event for the whole family. I must admit I can hardly wait to get to Spa at the end of July!“

General Entrance : 30 € (includes free entrance on Thursday and Friday)
General Entrance + paddock : 60 €
Children aged 12 or under, accompanied by an adult, enter for free
Sales on: www.24hoursofspa and www.ticketmaster.be

0 0 0 0 0
Previous : Dieter Gass: “Competition in the DTM is extremely fierce”
Next : Audi DTM drivers put through their paces