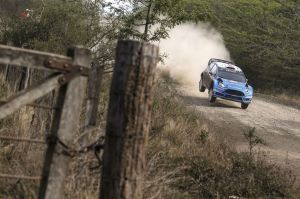 M-Sport World Rally Team’s Mads Østberg and Éric Camilli have delivered a measured start to the fourth round of the FIA World Rally Championship at this weekend’s Rally Argentina. Following the first full day of competition, the two Ecoboost-powered Ford Fiesta RS WRCs are sitting in sixth and eighth places with potential for further gains as the event continues.

Holding second place in the championship standings, Østberg is renowned for his consistency and looks set to prove that again this weekend. Driving well, he and co-driver Ola Fløene have – thus far – avoided all of the traps that the rough Argentinian stages have to offer. But there is more to gain. When everything falls into place, the combination of Østberg and the Fiesta RS WRC are capable of challenging for the top positions and that is the team’s ultimate goal moving forward. What is more, the Argentinian fixture never fails in its delivery of drama, and the Norwegian is well-placed to capitalise should the opportunity arise.

In the sister Fiesta RS WRC, Camilli and co-driver Benjamin Veillas were experiencing the event for the first time in competition. Eager to finish all of the stages, the Frenchman adopted a cautious approach having been given strict instruction to finish the event. Camilli might not be showing his true pace this weekend, but is getting to grips with the tricky nature of the stages and was quick to climb both the time sheets and the standings as the day progressed.

Elsewhere in the WRC 2 category, Elfyn Evans and co-driver Craig Parry were looking for a third successive victory behind the wheel of their Ford Fiesta R5 Evo and early indications suggested that would be the case. Despite suffering a front-right puncture four kilometres from the end of SS2, the pairing were still able to set the second fastest time just 5.3 seconds shy of Nicolas Fuchs. Sadly, they would be unable to continue their charge – encountering an electrical issue on the road section which brought their day to an untimely end before SS3. With his Fiesta fully repaired, he and Parry will return under Rally 2 regulations tomorrow when their aim will be to recover as many championship points as possible.

QUOTE, END QUOTE
Mads Østberg (6th) said: “This afternoon has been working quite well. We were pushing quite hard and I was pleased with the rhythm that we had. The stages held up really well and they were nice to drive. Pace wise we’re still not where we want to be. We want to be fighting for the top positions and we all know that we have some work to do to achieve that.” 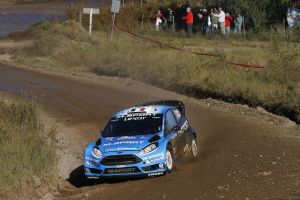 Éric Camilli (8th) said: “Everything has gone to plan today. We’re just focused on finishing the stages and not pushing at all, but we have learnt a lot and taken a lot of pleasure from both the stages and the driving. The car has been working perfectly all day and I feel as though we are growing more accustomed to these difficult stages which is good for the future.”

Elfyn Evans (6th WRC 2 / Rally 2) said: “It’s disappointing to have finished the day so early, but it’s just one of those things. We had an electrical issue after the first test of the day [SS2] and it looks as though the culprit was a faulty connector. We’ll be back out on the stages tomorrow when the aim will be to secure as many points and gain as much experience as possible.”

Team Principal, Malcolm Wilson OBE, said: “I’ve been keeping a watchful eye on the stages and it’s fair to say that we expected a bit more. This is a notoriously difficult event, but we know that Mads should be closer to the front. We need to work with him to understand why he hasn’t been able to show the pace he is capable of. This is another new event for Eric and his target is to complete all of the stages to gain the maximum experience. We’re not seeing his true pace, but if he can get to the end of the event he should secure a strong result which will build his confidence ahead of the return to Europe. Elfyn came here eager to claim a third successive victory in the WRC 2 series so it is a big disappointment to lose him so early on. He’ll be back fighting tomorrow with the aim of clawing back as many championship points as possible.”