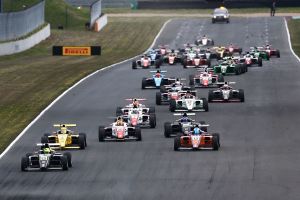 With less than three weeks to go before the start of the ADAC Formula 4 season in the Motorsport Arena Oschersleben (April 15th-17th), a strong field holds the promise of an exciting year ahead. 17 teams from six countries have nominated a total of 45 Formula 4 cars for the second season of the series. The field consists of a mix of national and international teams, as in the debut season.

The German teams Mücke Motorsport, which is run under the banner of the ADAC Berlin-Brandenburg eV, Motopark, Robin Brezina, Team Timo Scheider, Liqui Moly Team Engstler and Team Piro-Sports Interdental will tackle the second ADAC Formula 4 season. The following teams from Europe will also be in the line-up: RS Competition from Denmark, Lechner Racing and Neuhauser Racing from Austria, Jenzer Motorsport from Switzerland, Van Amersfoort Racing from the Netherlands and Italian outfit, Prema Powerteam. The full list of entrants in the 2016 ADAC Formula 4 will be published at the official media day of the ADAC Formula 4/ADAC GT Masters and ADAC TCR Germany to be held on April 4th at the Motorsport Arena Oschersleben.

“We were able to establish the ADAC Formula 4 as one of the strongest junior series right at the start in its debut year. It’s already becoming apparent this season that the series now has a long-term future after its successful launch,” said ADAC Sports President Hermann Tomczyk. “A look at Formula 1 shows just how important junior series like the ADAC Formula 4 are. All four German drivers currently contesting Formula 1 this year have won titles in junior ADAC single-seater racing series on their way to competing in the premier class.”

“The ADAC Formula 4 field was already at a high level but has become even stronger this year, both in terms of the number of competitors and the quality of teams,” said ADAC Director of Motorsport and Classic Motoring Lars Soutschka. “After an exciting debut season, all the signs are there that this year will be even more exciting. We’re already looking forward to a great race at the season opener at Oschersleben in less than four weeks’ time.”

The second ADAC Formula 4 season gets under way on the weekend of April 15th-17th, 2016, in the Motorsport Arena Oschersleben. The ADAC High-Speed Academy will contest fixtures at six race weekends during the ADAC GT Masters and at the joint ADAC GT Masters/DTM event at the Lausitzring and within the context of the TCR International Series in Oschersleben. TV partners SPORT1 will broadcast races live on free-to-air TV as well as online and on mobile devices.

ADAC Formula 4 will again rely on the services of established partners in the 2016 season, using Formula 4 racing cars with Abarth turbo-charged engines and chassis from Italian manufacturer Tatuus. Italian premium tyre manufacturer Pirelli, who are well-known from Formula 1, and wheel manufacturer MoTec also supply eqipment to the ADAC Formula 4. Suspension springs manufacturer Eibach and DEKRA, one of the world’s leading bodies of experts, are series partner. Auto Zeitung newspaper will continue to act as official media partners.