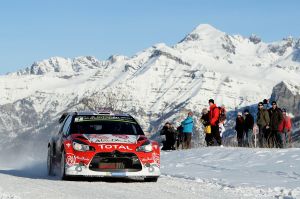 Three cars have been entered by the Abu Dhabi Total WRT at Rally Sweden (11-14 February). Following their impressive performance in Monte-Carlo, Kris Meeke/Paul Nagle will be joined in Scandinavia by Khalid Al-Qassimi/Chris Patterson and Craig Breen/Scott Martin. Each crew will have to negotiate different challenges at one of the most demanding, atypical events of the season.

The only full winter rally on the calendar, Rally Sweden is always eagerly awaited by fans of the WRC. The World Rally Cars are able to drift around the corners of the icy roads at speeds in excess of 160kph thanks to the grip afforded by the Michelin studded tyres. The crews and photographers love it here, as do the many spectators who brave the cold conditions to get a glimpse of their heroes on the stages. In Scandinavia, rallying is part and parcel of the local culture!

As the weather has been fairly mild for the last few weeks, conditions for the 2016 event look set to be very difficult. Even if temperatures drop dramatically and there is heavy snowfall, the snow banks lining the stages will in all likelihood remain too soft and the slightest error will almost certainly mean the crews having to dig themselves out of the snow.

Already in the limelight at the Rallye Monte-Carlo, the Abu Dhabi Total WRT will take another step forward this weekend in entering three cars at this round. On his sixth appearance in Sweden, Khalid Al-Qassimi will be the team’s most experienced driver. Winner of the prestigious Colin’s Crest trophy in 2008 – which rewards the longest jump on the Vargåsen stage, in memory of the late Colin McRae – the Abu Dhabi driver enjoys this event despite the fact it could not be any further removed from the deserts of the Middle East!

Having only competed in Sweden twice before, in 2014 (10th) and 2015 (7th), Kris Meeke is something of a novice here! Last year, the Northern Irishman produced a very strong performance since he was on course for a podium finish until he ran wide and got stuck in one of the famous snow banks on Finnskogen. This third appearance will therefore be devoted to gaining as much experience as possible for the future. 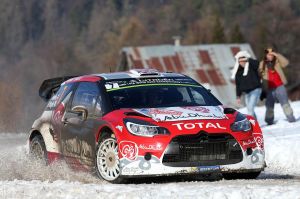 After appearing in Monte-Carlo for recce and to get used to the team’s way of working, Craig Breen will be contesting his first rally with the Abu Dhabi Total WRT. The Irishman is a big fan of the Swedish stages and knows that he has a golden opportunity to showcase his skills at the top level. Earlier in his career, Craig secured two category podium-finishes in Super 2000 cars (2011 and 2012). Two years ago, he scored points on his first competitive outing in a World Rally Car, as he finished ninth.

In line with the programme defined at the start of the season, the Abu Dhabi Total WRT crews will each have one day of pre-event testing, organised this weekend in the Hagfors region.

Kris Meeke (#7): “It’s true that I don’t have a lot of experience in Sweden, but this is one of my favourite rallies! Driving in these conditions is a genuinely unique pleasure. To begin with, you have to force yourself to push because your body and mind are telling you that you’re skidding. And yet you have to put as much power through the tyres as possible. And then the grip increases massively! It’s a bit like driving a car with a lot of downforce, you have to push back your own limits to get the absolute maximum in terms of performance… without overstepping the mark! This year, we know that the road conditions may be difficult but it’s the same for everyone. Although we made an encouraging start in Monte-Carlo, I don’t think we’ll be able to challenge for victory again, because I still have a lot to learn on this surface. But I would be pleased if I manage to reproduce the same kind of performance as last year.”

Khalid Al-Qassimi (#14): “Rally Sweden is so special, of course, and it has its own character. We have to deal with it carefully as the slightest mistake can cost a lot of time. We will follow a balanced rhythm of driving, as it’s two years since I last competed in Sweden. I have to get the feeling back in such tricky conditions, then we will raise our pace when we feel it’s possible to do so. My goal is to enjoy the rally and to finish it with the best result possible. I would like to wish Kris and Craig all the best in Sweden. I am confident that Abu Dhabi Total WRT will be competitive in Sweden too.”

Craig Breen (#15): “It’s a childhood dream come true. Being able to drive a car like this in the World Championship is such an important opportunity for the rest of my career. I would like to thank everyone that has made it possible for me to be here, starting with Abu Dhabi and Total. This is the first time I have competed at Rally Sweden in a World Rally Car and I have already seen just how hard it is to make the final step. Above all, it has been the level of competitiveness among the drivers that has most impressed me. I now have to grab this chance and show that I deserve my place among the elite. My aim is to keep improving throughout the rally, not to push like crazy on the first stage. I have a lot to learn and I’ll have other opportunities to show my speed. If I finish in the top six, that would be a fantastic result.”

Thursday, 11 February: shakedown at Bäck from 8am to 9.30am, then ceremonial start in Karlstad at 8.04pm.
Parc ferme from 8.48pm following the opening 1.9km stage.

Friday, 12 February: start from Karlstad at 6.20am.
Finish in Karlstad from 8.17pm following eight stages covering a total of 132.5km.

Saturday, 13 February: start from Karlstad at 5.35am.
Finish in Karlstad from 7.56pm following eight stages covering a total of 135.07km.

Sunday, 14 February: start from Karlstad at 5.30am.
Overall finish in Karlstad from 3pm following four stages covering a total of 61.74km.

0 0 0 0 0
Previous : Hyundai Motorsport set to field trio of New Generation i20 WRCs at Rally Sweden
Next : Volkswagen full of ambition ahead of unique WRC round in Sweden