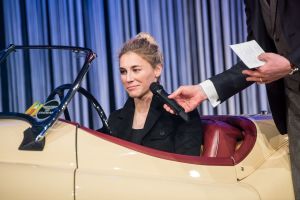 Two Audi drivers were involved in the ‘Swiss Car of the Year’ voting conducted by the ‘Schweizer Illustrierte’ magazine. GT3 driver Rahel Frey, who in the Audi R8 LMS won a race each in Korea and Germany this year, was one of the 14 members of an expert judging team. Nico Müller, DTM driver and winner of the Nürburgring 24 Hours with Audi, was part of a VIP jury. Both attended the awards ceremony at the gala event held in Safenwil in the canton of Aargau on Wednesday. In the readers’ choice voting of the general-interest magazine, the Audi Q7 took first place in the ‘Favorite Car of the Swiss’ category.