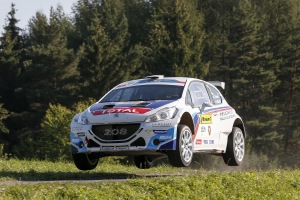 Craig Breen hopes to end the 2015 FIA European Rally Championship on a high by winning more rounds than his ERC rivals when he contests Rallye International du Valais next week (29-31 October). However, it will be no easy task for the Irishman with seven different types of ERC1 cars on the entry list for the Swiss asphalt spectacular.

The Peugeot Rally Academy driver missed out in the battle for the ERC title after Kajetan Kajetanowicz won the recent SEAJETS Acropolis Rally to clinch the coveted crown. After nine rounds, Breen and Kajetanowicz have claimed three wins apiece, but as the new champion isn’t contesting Rallye du Valais, Breen will be hoping to end the season as vice-champion – and with the satisfaction of having won more rallies than anyone else.

Breen is one of five drivers contesting the event in a Peugeot 208 T16 – and he’ll face a stiff challenge from Frenchman Bryan Bouffier, who has victories on Rallye Monte-Carlo and the Tour de Corse on his impressive CV. Bruno Magalhães has a chance to leapfrog from sixth to fourth in the final ERC standings, after the Portuguese ace added Rallye du Valais to his 2015 programme. The top Swiss seed is Jonathan Hirschi who will be expected to shine on home territory, while Emil Bergkvist’s progress will be followed with interest. The Swede is stepping up to ERC1 machinery as his prize for winning the ERC Junior title earlier this year and will drive a Michelin-shod 208 T16 run by Saintéloc Racing. 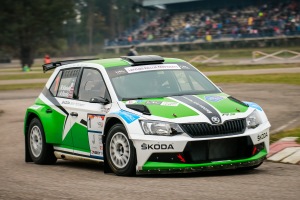 Rising Czech talent Miroslav Jakeš will make only his second rally start outside his home country in his Gemini Clinic Rally Team Citroën DS3 R5, 18-year old Russian Nikolay Gryazin will drive a ŠKODA Fabia R5, while Antonín Tlusťák will become the only driver to contest all 10 rounds of this year’s ERC when he drives his familiar Fabia S2000. Gryazin’s elder brother Vasily emerged as an ERC frontrunner with an impressive showing on Rallye du Valais in 2013 and Nikolay will be looking to follow suit. Multiple Swiss champion Florian Gonon, who claimed a dominant ERC Production Car Cup victory last year in a Subaru, returns in a Peugeot 207 S2000, while eight-time Valais winner Olivier Burri will drive a Citroën DS3 RRC on his home round of the ERC.

ERC2 title battle does down to the wire
The ERC2 title go down to the wire in Switzerland with Hungary’s hard-charger Dávid Botka and Czech ace Vojtěch Štajf going head-to-head in a Mitsubishi verses Subaru finale. Štajf had led for most of the season in his Subaru Duck Czech National Team Impreza WRX STI, but Botka has outscored him on the last four rallies to top the category by 18-points going into the final round. Botka has made the most of a change of co-driver and a switch to Pirelli tyres, and when Štajf missed the SEAJETS Acropolis Rally to honour a long-term commitment to contest the La Carrera Panamericana in Mexico, another win for Botka – his second in three rallies – meant a change of leader and the guarantee of an exciting title showdown. Having won ERC2 in Ypres, Hungary’s Tibor Érdi will be a strong contender on the asphalt of Switzerland in his Érdi Rallye Team Mitsubishi Lancer Evolution X.

Stratieva poised to retain ERC Ladies’ Trophy title in style
Ekaterina Stratieva is poised to retain her ERC Ladies’ Trophy title, when the defending champion contests Rallye du Valais in her Citroën C2 R2. Co-driven by Julianna Nyirfas, the Bulgarian is leading the category, and with none of her rivals competing in Switzerland, Stratieva will want to celebrate another European title with a strong run. Her rivals in the ERC3 category next week are Portugal’s Renato Pita (Peugeot 208 R2) and double Romanian 2WD champion Alex Filip (Renault Clio R3).

Delecour and Porsche set to thrill ERC senses
The sight and sound of François Delecour thundering through the Swiss stages in a Porsche 997 will thrill the senses when the rally legend contests Rallye du Valais. The ERC season closer is also the fifth and final round of the inaugural FIA R-GT Championship. Delecour has already become FIA R-GT champion, but that’s not going to stop him and co-driver Sabrina de Castelli delighting the spectators with their spectacularly driven Tuthill Porsche 997 R-GT. 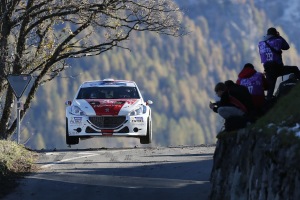 The route and format of this year’s Rallye International du Valais is very much in keeping with the tradition of the famous event. As usual, the 56th edition will feature a classic yet innovative itinerary around Sion, from where the rally will start, and Martigny, where it will finish. The action gets underway with Qualifying on the morning of Thursday 29 October on a 3.3-kilometre test a stone’s throw from the centre of Sion. Following the ceremonial start, three stages take place later the same day, beginning with Leukerbad (Loèche-les-Bains) at 14h30 local time. Two other classic specials follow, before the overnight halt in Sion after 32.95kms of timed running. Leg 2 on Friday (30 October) features two identical loops of three stages repeated twice, and between the two loops there will be a first pass in the Caserne stage. After the day’s seven stages, totalling 86.02kms, the overnight halt will be in Martigny at 18h00 – which is where the service area will move to for the final day as well. Leg 3 on Saturday (31 October) consists of seven stages, totalling 114.66kms, in the Verbier/Grand Saint Bernard region. The final day of competition in the 2015 ERC will be a tough one, with a blast over the 33.07km Les Cols (Etiez-Charrat) stage in the morning, and the 25.15km Col des Planches (Etiez-Arbarey) in the afternoon. After all 17 stages, totalling 233.63kms, have been completed the finish ceremony will take place at the CERM exhibition centre in Martigny at 17h00.

Q&A with Emil Bergkvist
Emil Bergkvist became 2015 ERC Junior champion in emphatic style, with three wins and a second place in his ADAC Opel Rallye Junior Team Adam R2. His prize was a drive on the final round of the series in an R5 car, and through a collaboration between Eurosport Events, Opel Motorsport and Saintéloc Racing, the 21-year old Swede will, together with navigator Joakim Sjöberg, contest the Rallye International du Valais in a 208 T16. Fiaerc.com caught up with Bergkvist ahead of his R5 debut.

What have you been doing since the final ERC Junior round back in August?
“I have done a lot of physical training. I will continue to do so the whole winter to be as fit as I can be for next year. My co-driver Joakim and I also competed in the final round of the Swedish rally championship in an Opel Astra Kit Car. We won our class and finished sixth overall, which was great. In addition we joined some events with Opel Motorsport. But I took some time off with my girlfriend as well!”

How much are you looking forward to making your R5 debut in Valais?

“I am really looking forward to it of course, as it will be a great experience and a big chance for us. I am so thankful to Opel Motorsport for making this happen by releasing us for this rally. After a season that couldn’t have been more successful with the ADAC Opel Rallye Junior Team and our fantastic Adam R2 this title-winning prize drive is like the cherry on the cream.”

The R5 car will be a lot different to your Opel Adam R2 – what have you been doing to get yourself as best prepared as you can be for this prize drive?
“Not too much, to be honest. As by now I totalled exactly zero kilometres in a four-wheel-driven car. We will get a test before the rally on similar roads. It will be a good opportunity to try to get a comfortable feeling in the car. Apart from that we will just trust in ourselves, do the best we can and see what happens.”

You’re very fast on Tarmac, and even though you have never contested the event before, do you think the Valais roads will suit your driving style?
“I honestly don’t know. It seems to me like the roads at Valais will be a mixture between Rally Barum and Rallye Deutschland. If it is like that they could suit me, I hope.”

What are you aiming for in Valais, in terms of stage and overall result?
“First of all, our main and actually only aim is to finish the rally and gain as many kilometres in the car as we can. The competition is so high in the ERC with so many talented and experienced drivers that it would be a big success to enter the top ten. And top six would be a dream.”

FIVE RALLYE INTERNATIONAL DU VALAIS FACTS
*While Rallye du Valais is designated an asphalt event, there are small gravel sections for the ERC aces to contend with, while ice – and even snow – can add to the challenge.
*Some 2700 volunteers will help run the rally this year, whole 20 ambulances and six helicopters will form part of the safety operation.
*Valais is in the French-speaking part of Switzerland where melted raclette is a speciality.
*With some 7,000 years of history, Sion – formerly known as Sedunum – is the oldest Swiss city and the capital of the canton of Valais. It’s home to many monuments, including four castles and four museums spread all over the beautiful historical centre.
*Martigny is also known as a former Roman capital (Octodure), where many ancient ruins are still visible. International fairs are frequently organised in the CERM while the Gianadda Foundation features art exhibitions and possesses a permanent automobile collection with some unique pieces displayed.

ON THIS EVENT IN 2014…
Esapekka Lappi and Sepp Wiegand ensured the battle for the 2014 FIA European Rally Championship crown would go down to the final round in Corsica, when the two ŠKODA Motorsport drivers finished first and third respectively on last year’s Rallye International du Valais. Lappi took the lead on SS5 and was never threatened during an ice-cool performance in his Fabia Super 2000 for his second Valais win in as many seasons. Wiegand had led, but lost time with a puncture and then brake problems, but inherited third after Kajetan Kajetanowicz’s Ford Fiesta R5 engine sprang an oil leak and caught fire on SS16. Craig Breen scored nine stage wins on his way to second overall in his Peugeot 208 T16, in a performance which earned him the prestigious Colin McRae ERC Flat Out Trophy. He could have challenged for victory but for a time-consuming puncture on stage three. Jonathan Hirschi (Peugeot 207 S2000) was the top Swiss finisher in fourth, Olivier Burri (Ford Fiesta R5) finished fifth and Robert Consani (Peugeot) finished sixth after losing time with a puncture. Florian Gonon (Subaru Impreza R4 STI) won the ERC Production Car Cup, while Laurent Reuche gave the Renault Clio R3T a spectacular ERC debut by taking the all-new machine to ERC 2WD glory. Swiss champion Sébastien Carron (Peugeot) retired with a broken drivershaft, Jaroslav Orsák (ŠKODA Fabia S2000) stopped with engine problems and Bruno Magalhães (Peugeot) and Jaromír Tarabus (ŠKODA) both crashed. Kevin Abbring led initially, but retired after brake and clutch problems with this Peugeot 208 T16.