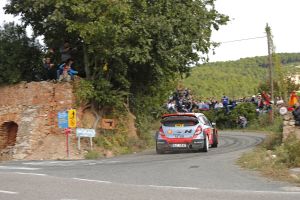 The Hyundai Motorsport team has come away from a competitive Rally de España with a well-deserved podium finish following a dramatic Power Stage, which promoted Spaniard Dani Sordo into third position.

All three of the team’s drivers had demonstrated good pace this weekend, round 12 of the 2015 FIA World Rally Championship (WRC), but it was the retirement of rally leader Sébastien Ogier in the Power Stage that clinched the final podium spot for Sordo.

The result keeps Hyundai Motorsport in third place in the Championship with the deficit to the second-placed Citroën World Rally Team at four points, and just one rally remaining – Wales Rally GB – in mid-November.

Sordo (#8 Hyundai i20 WRC) has been on consistently competitive form in Spain, giving the local crowd plenty to cheer about as he was regularly among the front-runners. He fought hard for a podium and was richly rewarded for his efforts alongside co-driver Marc Martí.

Sordo said: “I am so happy with this result and our performance this weekend. We fought hard for a podium result and it was looking like we were going to have to settle for fourth place, which would still have been a great result. Of course it is never nice to benefit from the misfortune of others but to be on the podium in front of the Spanish crowd is just fantastic. We knew it would be hard to break into the top-three but we never gave up and the outcome of this rally shows that you can never be sure of anything until the very end. We have some important points for the Championship and something nice to celebrate with the team and with the fans. It’s a positive thing to take into the final rally of the season, which will be decisive in our push for second in the Championship.”

Paddon (#20 Hyundai i20 WRC) and his fellow Kiwi co-driver John Kennard have used the asphalt stages of this weekend’s rally as another valuable learning experience. The duo claimed a joint stage win on Friday’s opening stage but a puncture-afflicted Saturday hampered progress. They regained one position after a solid SS19 (Pratdip 1 – 19.30km) to take seventh and were promoted to sixth after Ogier’s retirement on the Power Stage. 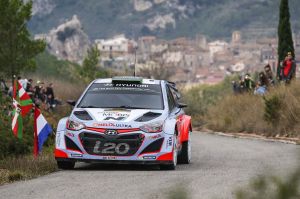 Paddon commented: “I am happy with how our weekend has gone overall. We made a good start on the mixed surface on day one and we have certainly shown a good improvement on tarmac compared to this time last year. We had a decent Sunday and were able to move back into seventh place, from where we just took it easy to bring the car home. We then, of course, moved into sixth place after Ogier’s incident in the final stage. All in all, it’s not been a bad weekend, although there is always room for improvement. We have tried to keep the pressure on the guys in front of us and I think we can be pretty satisfied with sixth. We now look forward to the gravel of GB with our focus on helping the team in the fight for second in the Championship.”

A disappointing end to Rally de España for Neuville (#7 Hyundai i20 WRC) and co-driver Nicolas Gilsoul saw the Belgian crew unable to capitalise on their improved feeling and confidence during the weekend as they fell to ninth overall after an off in SS22 caused by transmission issues. They reclaimed one position to eighth at the conclusion of the Power Stage.

Neuville said: “Not the way in which we wanted to end our rally, which up to today’s final stages had been a very positive event for us. We had a difficult start but gradually found more confidence from the car, which led to us improving on Saturday. This morning, we lost some time in the first pass through Pratdip following a spin and then, in the second run through that stage, we had a transmission issue, which pitched us into a ditch. We lost five minutes of time and had to run the Power Stage with two-wheel drive. It was unlucky, but thankfully we got the car home and could gain a position at the end to finish eighth. We have one round of the season left and I am focused on continuing to find the confidence we have started to rediscover this weekend.”

Today’s podium marks the third event of 2015 in which Hyundai Motorsport has stepped onto the podium following Sweden and Sardinia, and the first top-three of the year for Sordo. The team still holds third in the Championship, and sets up a tantalising battle for second in the season finale. 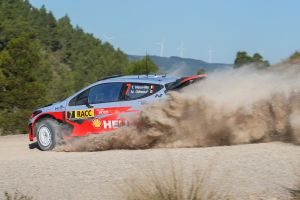 Team Principal Michel Nandan said: “In the end, we can celebrate a brilliant podium thanks to a very dramatic end to this rally. It is particularly special for Dani in front of his home fans and helps us add some important points for the Championship fight. We have shown some really solid pace from the Hyundai i20 WRCs this weekend in what is a complicated mixed surface event, so that is very encouraging. Hayden’s sixth place is a nice reward for his efforts this weekend, particularly after his punctures yesterday, while Thierry can take consolation from finishing eighth after a tough final day. He had a transmission issue in SS22, the penultimate stage, which sent him off the road, and he then had to complete the rally with two-wheel drive, which certainly minimised the damage in terms of scoring points. Three cars in the top-eight and a podium result is a nice achievement and the team has done an exceptional job. There’s just one rally left – and one important job for us – to push for second place. We know we’ll have to fight for it but we’re up for the battle!”

The final round of the 2015 FIA World Rally Championship takes place in Great Britain from November 12-15.

0 0 0 0 0
Previous : WRC – M-Sport maintain points record at difficult Rally RACC
Next : WRC – Important Points ahead of the Final Round