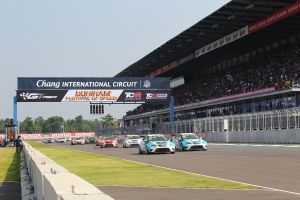 The two races at Chang International Circuit in Buriram that inaugurated the era of international car racing in Thailand were a success, and delivered results that leave the battle for the first TCR International Series title as open and excited as possible.

Macau will see a grand finale, with Stefano Comini and Pepe Oriola separated by only two points, and Jordi Gené still in contention a further 32 points adrift.

In Buriram, Oriola and Comini took a win apiece, in a weekend that saw the SEAT cars dominate their rivals, with the Craft-Bamboo Lukoil team posting a 1-2-3 in Race 1 (Oriola, Gené and Afanasyev), and Target Competition signing a 1-2 in Race 2 with Comini and Hezemans. The young Dutchman shone and brilliantly took his first TCR podium, after an epic duel with Oriola.

The two SEAT teams will fight in Macau for the Teams’ title as well, as Craft-Bamboo Lukoil has only 13 points of advantage on Target Competion.

It was a weekend to forget for the Honda, Volkswagen, Opel and Subaru cars, all victims of technical issues or race incidents; notably Gianni Morbidelli was inflicted a drive-through for jump-start in Race 1 and was stopped by an engine failure in Race 2, his hopes to stay in contention for the title washed away.

The TCR International Series will resume on 19 to 22 November at Macau, for its maiden season’s final.

It was a perfect race for the Craft-Bamboo Lukoil team in Race 1 at Buriram, as Pepe Oriola, Jordi Gené and Sergey Afanasyev took a resounding 1-2-3, the second of the season, after the one in Race 1 at Valencia.

It was a linear race, defined after poleman Gianni Morbidelli, who led during the opening laps, had to serve a drive-through penalty for a jump-start. The WestCoast Racing Honda driver managed to finish in the points (10th) despite the setback.

Oriola’s second win of the season comes at a key moment and allows him to retake the lead in the Drivers’ Championship by 8 points ahead of Stefano Comini, who finished 5th right behind the Honda of Kevin Gleason and ahead of teammate Loris Hezemans.

Lorenzo Veglia took 7th after winning the nicest battle of the race ahead of Tomas Engström and René Münnich, while local driver Munkong Sathienthirakul confirmed himself as the best of the Asian contingent, winning in the TCR Asia and crossing the finishing line in P11.

Start – Morbidelli takes the best start, ahead of Oriola and Gené, while Grachev and Valente stall, prompting a contact that results in Holland spinning

Lap 4 – Sritrai and Menu swap positions while fighting for 13th

Lap 5 – Morbidelli serves the drive-through and rejoins in P16; Oriola takes the lead ahead of Gené and Afanasyev.

Lap 6 – Veglia and Engström have a close fight for 8th, with a light contact; Münnich and Sathienthirakul are very close behind; Holland pits for bodywork repairs

Lap 9 – Engström is chased by Münnich. 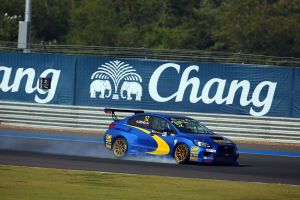 Lap 12 – There is smoke coming out Menu’s car

Race 2 – Comini and Hezemans on… Target

Target Competition drivers dominated a lively Race 2 in Buriram, with the Italian team signing a brilliant double win. Stefano Comini took a lights-to-flag victory, his fifth of the season, claiming back the leadership in the standings, by only two points.

Loris Hezemans finished second after a great performance, which saw the young Dutchman defending fiercely his first TCR podium from the attacks of Pepe Oriola and Jordi Gené.

The excellent performance of the SEAT cars was completed by the fifth position taken by Lorenzo Veglia, again after a close battle with Tomas Engström and Sergey Afanasyev.

Machines of other brands had a much bitter Race 2: the Honda cars of both Gianni Morbidelli and Kevin Gleason were put out of contention (the Italian was fighting for the podium); the pole-sitting Opel of Hugo Valente was pushed off the grid with the engine stalled after the warm up lap while Robb Holland’s Ford was excluded because the driver did not serve a drive-through for unsporting behaviour and later ignored the back flag.

Start – Valente’s Opel stalls at the end of the warm-up lap and is pushed into the pits; Comini takes the lead from Hezemans, Oriola, Gené, Afanasyev and Veglia.

Lap 2 – Comini, Hezemans and Oriola are very close, with Morbidelli and Gené not far behind.

Lap 3 – Gleason stops in the pits following a contact, with a broken wheel

Lap 4 – The first five are within two seconds, with some rubbing between Oriola and Morbidelli who manages to pass and takes third

Lap 6 – Morbidelli gets closer to Hezemans; in the TCR Asia there is a great fight for 3rd between de Souza, Holland and Pu

Lap 8 – Oriola retakes third from Morbidelli with a great move on the straight.

Lap 9 – Veglia, Afanasyev and Engström have a close fight for 6th

Lap 10 – Morbidelli stops on the track with engine problems; Hezemans and Oriola fight for 2nd

Lap 12 – Comini has pulled away a bit, as Hezemans and Oriola carry on fighting

Lap 14 – Hezemans resists, finishing second behind Comini and ahead of Oriola and Gené 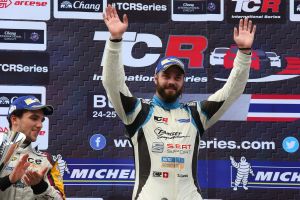 Stefano Comini, winner of Race 2: “It was a difficult weekend that ended better than it started. The car did not perform well in practice and qualifying, and we still don’t understand why. We changed everything we could change before the races: gearbox, intercooler, turbo…  and things went better. In Race 2, I used the advantage of the front row. Still, I have to give a big thank to Loris (Hezemans), because he protected me very well. A two-point advantage before Macau is obviously very slim, but we will see. I have never raced there and this is a clear disadvantage. I’m training at the simulator, but it’s different when walls are real…”