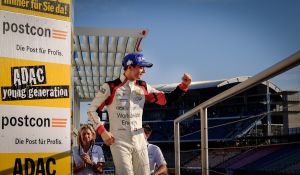 After his sixth win of the season in the first round of the Formula Renault 2.0 Northern European Cup at Hockenheim, Louis Delétraz (Josef Kaufmann Racing) is 59 points ahead of Ukyo Sasahara (ART Junior Team). In the two races on Sunday there are still 60 points up for grabs. Winning the championship is a mere formality for Delétraz.

The Swiss led from start to finish. Directly after the start Ukyo Sasahara passed Jehan Daruvala (Fortec Motorsports). The next overtaking move by the Japanese was to pass Kevin Jörg (Josef Kaufmann Racing) while turning into the Parabolica. It didn’t take Force India Junior Daruvala not too long either to overtake Jörg as well. 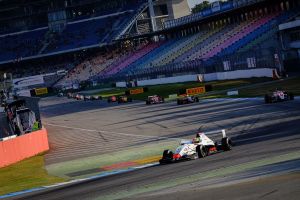 Even a safety car period, caused by a collision between Colin Noble (MGR Motorsport) and Alex Gill (Fortec Motorsports), changed nothing. Sasahara is, at least on paper, the only remaining championship rival to Louis Delétraz. Kevin Jörg, finishing fourth, is in de facto out of the title race. Sasahara and Jörg are however only a mere two points apart. With Daruvala’s third podium finish the Indian is now only four and a half points away from Max Defourny (ART Junior Team). The Belgian finished seventh following a 10 second timepenalty for Dries Vanthoor. Who the Rookie of the Year is going to be, is only going to be known at the end of the last race. 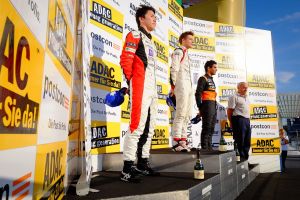 1. Louis Delétraz (# 14 Josef Kaufmann Racing): “I came this weekend to win as many races as possible and trying not to crash. So pole position for all three races was a good start of the weekend. Winning race one is also very good. I only needed one more point and I would have won the championship today. Looking forward to the first race tomorrow”.

2. Ukyo Sasahara (# 9 ART Junior Team): “I had a good start and a perfect good line to exit the first corner. Louis (Delétraz) was to quick so I concentrated on driving for points. I am happy to be second and still looking at becoming second overall in the championship.”

3. Jehan Daruvala (# 6 Fortec Motorsports): “I started from third but not very good. I lost to Kevin (Jörg) but later had a good restart and was able to move back up to third. I tried to stay with Sasahara but just couldn’t. I have to thank the team as they did a great job on the brakes. I struggled in free practice but in the race the brakes were just great.”