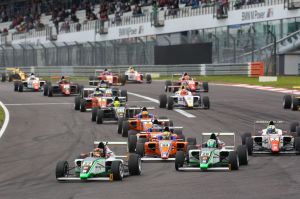 HTP Juniorteam have got off to the perfect start after the summer break. Marvin Dienst (18, GER, HTP Juniorteam) won the first of three races at the Nürburgring ahead of his team-mate Janneau Esmeijer (18, NED, HTP Juniorteam). The 18-year-old was handed his fourth winner’s trophy of the season by ADAC Sports President Hermann Tomczyk. Esmeijer received his third trophy of 2015 from DTM driver Bruno Spengler. Lando Norris (15, GBR, kfzteile24 Mücke Motorsport) completed the podium party in third place and also picked up the award for best-placed rookie.

“I came away from the season opener at Oschersleben with a double victory,” said Dienst. “Now I’ve got off to a similar start after the summer break. The objective for the second race is therefore clear.” The youngster from Lampertheim (Hessen) laid the groundwork for his race win right at the start. From second position on the grid, he overtook Esmeijer on the run-in to the first corner and then never looked back. He eventually crossed the finish line 2.856 seconds ahead of his HTP Juniorteam team-mate. In the final stages of the race, Esmeijer had to defend P2 against a determined challenge from the pursuing Norris. However, a minor excursion off-track by the 15-year-old gave Esmeijer enough breathing space to bring his car safely home in second place.

Norris continued his successful run in ADAC Formula 4. The kfzteile24 Mücke Motorsport rookie claimed his third podium in only his fourth outing in the ADAC High-Speed Academy. Starting from fourth on the grid, Norris was involved in thrilling scraps with championship leader Joel Eriksson (17, SWE, Motopark) in the first third of the race. On Lap 8, the series newcomer managed to pull off the decisive pass in the Mercedes Arena. After am impressive start from P7 on the grid, the Swedish title contender had to settle for fourth place.

Joey Mawson (19, AUS, Van Amersfoort Racing), who currently lies second in the championship, managed to compensate for a poor qualifying by finishing eighth and picking up valuable points in his title battle with Eriksson. On the 21st and last lap, Mawson overtook his Van Amersfoort Racing team-mate Mick Schumacher (16, GER, Van Amersfoort Racing). Because of the reversed-grid regulation, the son of record Formula 1 championship winner Michael Schumacher will now start the third race on Sunday (live coverage on SPORT1 commences at 15:30 CEST) from the front row alongside pole-setter Tim Zimmermann (18, GER, Neuhauser Racing).

Going into Race 2 on Saturday (live coverage on SPORT1 commences at 16:30 CEST), Eriksson continues to lead the championship. The Swedish driver has accumulated 175 points from the 13 races so far contested. His lead over second-placed Mawson is twelve points. Dienst in third place has scored 154 points and will be starting the second of the weekend’s three races from P2 alongside Esmeijer.

Comments from the podium

Marvin Dienst (18, GER, HTP Juniorteam), Winner:
“I came away from the season opener at Oschersleben with a double victory. Now I’ve got off to a similar start after the summer break. The objective for the second race is therefore clear. I staked my claim to the win in the first few metres. Initially, I wasn’t too happy about my start but still took the lead anyway. Over the summer break, I’ve been working hard on my start procedure and decided on a safety-first start in Race 1. I then tried to build up a sufficient gap at the front so as not to allow my opponents any slipstream. After that, I managed my lead and nursed the tyres for the other two races.”

Janneau Esmeijer (18, NED, HTP Juniorteam), Second:
“Starting from pole, I had obviously hoped to win. But second place is still a very good result. After a couple of difficult weekends, these points are very important towards the championship. My only major mistake came at the start, and that’s probably what cost me the victory. I released the clutch just a bit too early, the wheels spun and I then lacked the straight-line speed on the way to the first corner. At the end of the race, Lando was catching up again, and it was pretty tight. But I kept a cool head while he made a mistake and fell back slightly. I now have the next chance to win from pole position in the second race.”

Lando Norris (15, GBR, kfzteile24 Mücke Motorsport), Third:
“To have got back on the podium immediately after my return to ADAC Formula 4 counts as a super result. I want to thank my team. The straight-line speed of the car was fantastic, as fourth place on the grid already demonstrated. I got off to a great start but was struggling for grip on the first few laps and consequently lost a position. Once I had found my rhythm and warmed up the tyres, I worked my way forward and succeeded in passing Joel Eriksson. From that moment on, I had the runner-up spot in my sights. I almost managed to do it but unfortunately I braked a bit too late in the final chicane. I came off the track briefly and lost touch.”