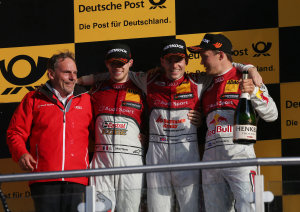 A great day for Audi in the DTM: At the Lausitzring, the brand with the four rings celebrated a commanding one-two-three-four victory on Saturday evening and remains unbeaten in the 2015 DTM. Jamie Green in the Hoffmann Group Audi RS 5 DTM of Audi Sport Team Rosberg recaptured the lead of the standings on scoring his second success of the season. Audi Sport Team Abt Sportsline in positions two, three and four completed Audi’s triumph.

A perfect start followed in which the Audi quartet was able to parry off the attacks by the competition from BMW and Mercedes-Benz and defended positions one to four initially in the same order. Up to the 25th of the 32 laps Miguel Molina defended the lead before having to give in to the pressure by his brand colleagues Jamie Green, Edoardo Mortara and Mattias Ekström, which caused him to drop to fourth place.

The second victory of the season by Jamie Green was particularly impressive from two perspectives. The Briton is not in the best of health and can hardly talk, which made radio communications with his team more difficult. In addition, the drag reduction system (DRS) that allows the rear wing angle to be flattened did not work in his case. “That’s why it was hard to overtake Miguel (Molina),” said the Briton following his triumph. “But my car was simply perfect for my driving style. With two successes in the first three races, this is a dream start to the new season for me.”

Three Audi drivers – Jamie Green (50 points), Edoardo Mortara (48) and Mattias Ekström (40) – continue to rank at the top of the standings. After a qualifying session that was not optimal, the two drivers from Audi Sport Team Phoenix finished in the points as well. Timo Scheider (AUTO TEST Audi RS 5 DTM) battled his way forward from grid position ten to eighth place and Mike Rockenfeller (Schaeffler Audi RS 5 DTM) from 14th on the grid to position nine. 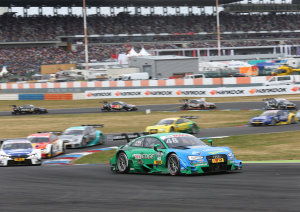 “You don’t get to see a one-two-three-four result in the DTM every day,” said Dieter Gass, Head of DTM at Audi Sport. “That’s why our joy is even greater – especially at the Lausitzring, a track that we often had some difficulty with in the past. This shows that we really did good work in winter. But we’re keeping our feet planted firmly on the ground. Although things seemed to be pretty easy for us at the front today the gap to the competition isn’t very large. The tides can turn very quickly in the DTM because the field is so close. Things can look completely different tomorrow.”

Seldom has a brand been as dominant on a DTM weekend as this time: 60,000 spectators witnessed an impressive showing by the Audi RS 5 DTM at the Lausitzring. The one-two-three-four win on Saturday evening was followed by an even greater Audi triumph in positions one to five on Sunday afternoon.

The Audi show at the Lausitzring was led by Jamie Green. The Briton from Audi Sport Team Rosberg in the Hoffmann Group Audi RS 5 DTM repeated his commanding success from the day before, which makes him the first double winner in the 2015 season. In the early stage, Green prevailed in a direct duel with his brand colleague Mattias Ekström in the Red Bull Audi RS 5 DTM of Audi Sport Team Abt Sportsline. After having dropped from first to second place at the start, he managed the decisive overtaking maneuver on lap eight. Afterwards, he was able to achieve a small advantage and immediately pulled clear again following a caution period shortly before the end of the race.

“The race today was harder than yesterday,” Green said after scoring his third victory of the season. “Mattias (Ekström) was fast and my advantage was never really large. Obviously, having won both races here is mega.” Mattias Ekström clinched a similarly uncontested second place and is now trailing Jamie Green in second place of the overall standings.

Miguel Molina in the Teufel Audi RS 5 DTM in third place notched up his first podium result of the season. On Sunday, the Spaniard fought a duel with Timo Scheider in the AUTO TEST Audi RS 5 DTM of Audi Sport Team Phoenix nearly throughout the entire race, which Molina decided in his favor by a narrow margin.

Edoardo Mortara in the Castrol EDGE Audi RS 5 DTM in fifth place scored points again in the year’s fourth race, which puts him in third place of the standings with an equal points score as Mattias Ekström. Following the caution period, Edoardo Mortara successfully defended himself against an attack by Mercedes driver Daniel Juncadella on the final lap. 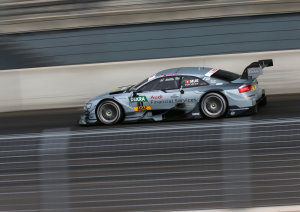 Nico Müller (Audi Financial Services Audi RS 5 DTM) and Mike Rockenfeller (Schaeffler Audi RS 5 DTM) in positions nine and ten caused seven of the eight Audi drivers to finish in the points. Only Adrien Tambay went home empty-handed. The Frenchman had battled his way forward from position 20 on the grid before being turned around by Bruno Spengler and forced to retire shortly before the end of the race. The BMW driver received a 30-second post-race penalty for the incident.

“Yesterday I said that one-two-three-four wins are very rare in the DTM,” Dieter Gass, Head of DTM at Audi Sport commented. “That we even had five of our cars finish at the front today crowned a perfect DTM weekend for Audi. We’re delighted but we also know how quickly the tables can turn again in the DTM. Our home round at the Norisring in four weeks from now will literally be a heavy challenge, as we’ll have to add even more weight to our cars. But that we’ve been able to deliver such a performance at the Lausitzring of all places shows how strong the Audi RS 5 DTM is this year.”

With the double success at the Lausitzring, Audi extended its lead in the DTM manufacturers’ standings as well. Audi Sport Teams Rosberg and Abt Sportsline are ranked at the top of the standings with an equal points score.

Edoardo Mortara (Castrol EDGE Audi RS 5 DTM #48) Position 2 / position 5 “This DTM season is really great fun: four races, four times in the top five and two of them on podium. But the fact that Audi has given us a real winning car in the RS 5 DTM is a lot more important. Everyone knows that we won’t be celebrating success like the one at the Lausitzring every weekend. But every one of us has the opportunity to win races and to battle for the championship – 14 more times this season. In a couple of days from now, the opening of my second restaurant in Geneva is on my agenda, plus plenty of training and, obviously, looking forward to one of the season’s highlights at the Nuremberg Norisring.”

Nico Müller (Audi Financial Services Audi RS 5 DTM #51) Position 20 / position 9 “If you weigh the positives against the negatives, my Lausitz weekend with two points on Sunday just barely ends up in the positive range. I don’t have a lot of experience on this track yet because my first run at the Lausitzring last year lasted only ten laps. There was more potential in round two, but in the DTM everything’s got to perfectly fit if you want to be further in front. Audi is extremely strong this year and my Rosberg team has already scored three in four victories with Jamie. So it promises to become an exciting year. After the 24-hour race at the Nürburgring and the DTM I’m now looking forward to a breather. Then we’re traveling to the Norisring – that’s a highlight for me because I’m a big fan of city street circuits.”