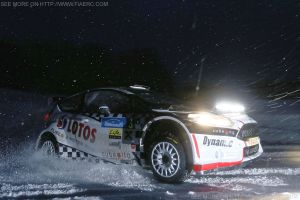 Kajetan Kajetanowicz recorded fastest time on all but the final stage of the opening round of the 2015 FIA European Rally Championship to win the snowy Internationale Jännerrallye powered by GaGa Energy.

Co-driven by Jarek Baran, the 35-year old Pole was in a class of his own and inch perfect over the treacherously slippery stages, which were played out over two days in the beautiful Mühlviertel region of Upper Austria. Regardless of the level of grip, in snow blizzards or in sunshine, on daylight stages or at night, Kajetanowicz was unbeatable in his Pirelli-shod Ford Fiesta R5 – increasing his lead at every opportunity to win by more than seven minutes.

“It’s the best weekend ever, it’s fantastic, amazing and thank you to my whole team and my sponsors,” said the LOTOS Rally Team driver, who wins 7000 Euros in prize money and also tops the ERC Ice Master classification heading to round two in Latvia next month.

The greatest fightback on the event was by Alexey Lukyanuk. The Belarus driver lost almost five minutes on the opening stage when he was forced to stop to let his Ford Fiesta R5’s overheating engine cool down. Having dropped to 23rd position, Lukyanuk set 15 second fastest stage times over the remaining 17 stages – and fastest time on the 18th and final stage to deny Kajetanowicz a stage win whitewash – and beat Jaromír Tarabus to third place, picking up the coveted Colin McRae ERC Flat Out Trophy in the process. Lukyanuk will receive a cheque for 5000 Euros at the podium finish in Freistadt this evening.

Tarabus started the final stage 8.5s ahead of Lukyanuk, but ended 20.7s behind in fourth. The Czech’s ŠKODA Fabia S2000 had struggled with grip throughout the event, particularly towards the end when he had used all his allowed supply of 18 new tyres.

Austrian Martin Fischerlehner was the top local finisher, after an excellent run to fifth in his Mitsubishi Lancer Evolution IX. 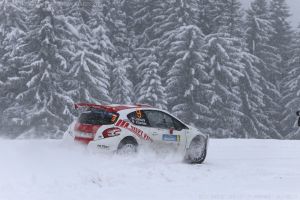 Thanks to a large number of spins and a huge overshoot around a house, Jonathan Hirschi (Peugeot 208 T16) had covered more stage kilometres than anyone else! His superb never-give- up efforts were rewarded on the final stage, when he stole sixth place away from Antonín Tlusťák (ŠKODA Fabia S2000) by just 2.8s.

Jean-Michel Raoux wasn’t able to test his Ford Fiesta R5 before the event and therefore struggled with differential set-up throughout, yet he still managed to compete the top 10 – behind the two leading ERC2 drivers (see below) – despite a costly trip into a snow bank this morning.

Breen restarted under Rally 2 rules this morning following his stage-one exit and bagged three bonus points for finishing leg two in fifth, albeit outside of the final classification, in his Peugeot Rally Academy 208 T16.

ERC Junior champion Stéphane Lefebvre was on course for fifth spot when a mechanical failure forced his exit. Nevertheless the hugely talented Frenchman was able to gain plenty of experience at the wheel of his Citroën DS3 R5. He’ll be back on ERC duty on the Geko Ypres Rally in June.

Sławomir Ogryzek set the fastest time on 12 of the first 13 stages to carve out a clear ERC3 lead in his Peugeot 208 R2. The Polish driver never put a foot wrong and eventually won the class by an impressive margin of more than four minutes and finished an incredible 11th overall. Simone Tempestini’s confidence grew as the snowy event progressed and denied Ogryzek a clean sweep of stage wins with six fastest times of his own in his Napoca Rally Academy Citroën DS3 R3T. Teenager Kristóf Klausz was third in his Renault Clio R3 ahead of fourth-placed Szabolcs Varkonyi (Honda Civic Type R3). Portugal’s Renato Pita, who was competing on snow for the first time, put a longer ratio gearbox in his Peugeot 208 R2 for leg two, which helped him increase his speed and finish fifth – one place ahead of Grzegorz Sikorski (Honda Civic Type R).

0 0 0 0 0
Previous : ERC – Perfect 10 for ERC leader Kajetanowicz on snowy Jännerrallye
Next : A record 95 cars on the grid for the tenth anniversary edition Hankook 24H DUBAI